US Secretary of State marks August as the date for a new constitution following his meeting with the Russian president, accelerating the political battle between the Syrian sides 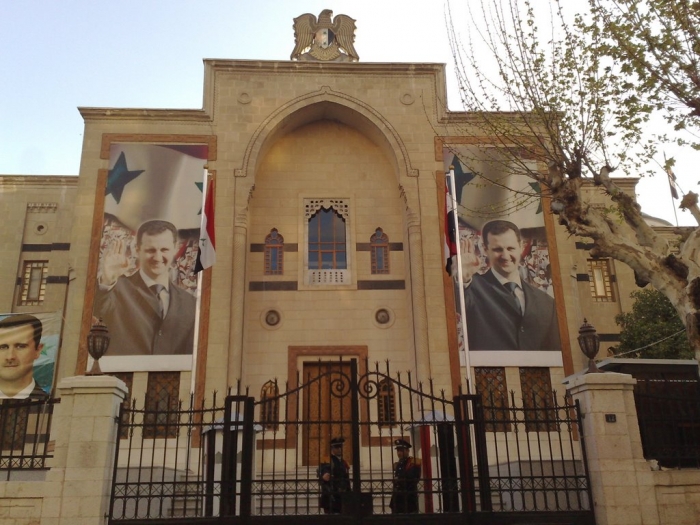 The Syrian political battle is now centered on the constitution, which is one of the pillars of the agenda of the ongoing negotiations in Geneva, according to international resolution 2254. This will be followed by the formation of a “full and non-sectarian representative government” within six months which will be preceded by elections under the monitoring of the United Nations with the participation of authorized refugees within 18 months.

US Secretary of State John Kerry set the month of August as the date for a “new constitution” after his meeting with Russian President Vladimir Putin, accelerating the political battle between the Syrian sides, in addition to confounding media officials in Damascus. The official Syrian news agency SANA, which reported most comments of Kerry and his Russian counterpart Sergei Lavrov, ignored the date for the constitution.

In line with this perception based on a “constitutional vacuum,” presidential elections were held in 2014 despite international Western criticism and doubts about legitimacy. There has been an insistence on conducting parliamentary elections on April 13, despite tacit Russian frustration that holding them contradicts the contents of resolution 2254 as well as the statements of the International Syria Support Group, which were written by Lavrov, approved by Kerry, and heard by other members in the association.

The international envoy knew about background discussions held between regime loyalists and opposition members to formulate new constitutional drafts and options. According to documents viewed by al-Hayat, international and Syrian experts are looking into three options: First, the constitution of 2012 and the need to amend 23 articles connected with the president’s executive, legislative, constitutional, military and judicial powers. Second, adopting a new constitution or returning to the constitution of 1950. Third, the constitutional declaration. The discussions revealed the gap resulting from the haste in formulating the “Geneva declaration”, which was issued in 2012, based on proposals led by the former Iraqi Foreign Minister Hoshyar Zebari, inspired by the Iraqi experience in forming a “transitional governing council” after the US-led intervention in 2003. But it was clear that talk about a “fully-empowered transitional governing authority and mutual acceptance” includes the problematic absence of legislative dimensions for this “authority”, according to the thinking of international experts. The opposition sees the “transitional authority” as the high authority which all Syrian institutions will follow – military, security, executive and civilian. The regime sees the authority as “under the president.”

The principles approved by the Russian and American sides are based on pushing toward a “political transition” built on “participation of officials in the regime and the opposition in formulating a new system”. Kerry during his visit to Moscow four months ago made no mention of “regime change”, while Lavrov did not mention his conviction that “the regime remain unchanged”. And so the proposal is negotiations between representatives of the government and opposition in May to form a new participatory government by the end of May or beginning of June.

Official Syrian media’s disregard of Kerry’s comments in Moscow about the “new constitution” do not reflect the truth. The Syrian government has prepared for this “battle.” According to reports, the government delegation is “armed” with amendments to the 2012 constitution including three changes: “Removal of the phrase that Islam is the religion of the president of the republic, the president has two seven-year terms beginning from the coming elections, and the president is elected through parliament and not by direct referendum. This is in harmony with the constitution of 1950.”

The constitutional battle sets landmarks for the presidential elections. Thus, the latest amendment is important to Damascus and its allies because it empties a basic item of resolution 2254 of its content. While formulating the Vienna declarations before they were issued in an international declaration, the Iranian Foreign Minister Mohammad Javad Zarif rejected specifying the nature of the coming elections (parliamentary or presidential) after the end of the transitional phase. He said that defining the nature of the regime is up to the Syrians because Syrians could decide to elect the president in parliament. Therefore, Syrian Foreign Minister Walid al-Muallem “exploded” when de Mistura said on March 10 that the negotiations aimed to discuss “parliamentary or presidential elections”, meaning he was defining elections undefined in the international resolution and specifying the nature of the political regime before it is specified.

The worry in Damascus is that the Syrian refugees who are mostly opposition would be able to vote under the administration and monitoring of the United Nations. Considering that Syrians vote in presidential elections and do not vote in the parliamentary elections, the proposal to amend the political regime and return to the 1950 constitution which was “cursed” because the opposition adopted it, is a presentation of a “prescription” which voids the Iranian-Russian “concessions” (UN monitoring and the right of refugees to vote) of their effect.

It is thought that the government delegation has put “the amended constitution” in its pocket and will present it at the appropriate time in the Geneva talks, which the Americans and Russians and de Mistura want to focus on material issues and “the political transition” and the constitution when they resume on the 10th of next month.