Despite the HNC's decision to withdraw from the Syrian-Syrian negotiations, the unanimous decision to suspend the talks after internal debate is clear evidence of the birth of a democratic process, and a real source of hope 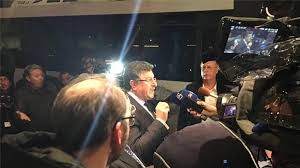 No sooner had negotiations launched than opposition representatives noticed a shift in behavior, as pressure on the Syrian authorities disappeared and talks began to address a resolution of the Syrian conflict, rather than continuing on the basis of previous international documents. The opposition stressed the need for President Bashar al-Assad to leave power and of forming a “transitional governing body,” but the discussion took a new twist, permeated by talk of a “national unity government,” and even an “expanded government.”

In this framework, the basic idea consisted of Bashar Assad remaining in office as the “symbolic president” of the country, according to several proposals from mediators, while the scope of the presidency would be expanded by appointing three vice presidents from the opposition. The High Negotiations Committee categorically rejected this proposal. Khalid Khoja, the former head of the main political opposition bloc, the Syrian National Coalition, raised a question which needs no answer. Assad currently has two vice presidents, and what are their powers?

Opposition representatives expressed anger at the mediators, who departed fundamentally from the planned framework for political action. They grew disillusioned by the limited support which the “Friends of Syria” offered the opposition, and stated: If we received half the aid the regime receives from its friends, or even 20 percent, we would be finished with this matter by now.

The most important disappointment the members of the High Negotiations Committee faced was the failure to make any significant progress on the humanitarian level. With the start of the Geneva talks, a ceasefire was supposed to have been implemented, accompanied by the entry of emergency aid to the towns and villages that have been blockaded for many months and, in some cases, years.

There were supposed to have been “confidence-building measures” between the warring sides, according to the vocabulary used in international diplomacy. But after three years of siege, when the United Nations delegation entered the town of Daraya south of the Syrian capital, its members arrived empty handed, without any food or medical aid. No positive initiative has been made in this matter, such as freeing political prisoners and hostages. Meanwhile, regime forces carried out attacks on some strategic fronts, such as the Aleppo countryside. At the same time, opposition activists report that foreign military aid to rebel groups has declined notably under the pretext of the ceasefire.

Such were the prevailing conditions when the Free Syrian Army announced its approval of the political process, but it clearly rejected any role for Assad in the transitional period. It stressed the absence of any positive steps on the ground from regime forces, indicating that even the Free Syrian Army is subjected to pressure from its backers, and was exposed to the criticism of fundamentalist Islamist groups, which say that negotiating with the enemy is a betrayal, and in any case will not yield results.

On the morning of April 19, the High Negotiations Committee decided to “suspend” their participations in the talks. One of the negotiators explained this decision by saying that if just one achievement had been made on the ground — not even liberating prisoners, for instance, but merely allowing the Red Cross access to the secret prisons, which could be considered an achievement in itself — it could justify their presence.

Riyad Hijab, head of the High Negotiations Committee, organized a press conference where he explained the reasons for his team’s withdrawal from the negotiating table. He carried a picture of Mohamed Shaaban, from Madaya, an 18-year-old boy, reduced to a skeleton, who died after being prevented from leaving the besieged town to receive medical care.

In the view of Osama Abu Zeid, an activist and legal adviser to the High Negotiations Committee, one achievement had been made during the process: throughout the last five months, the negotiating committee became able to work as an institution despite internal differences and a structure which includes various parties, from Islamists to the coordinating body, from civilians to representatives of armed factions.

It is notable that the decision to suspend talks was subject to internal debate and was adopted unanimously, in clear evidence of the birth of a democratic process, composing a real source of hope. Throughout the years, the international community has criticized the Syrian opposition for its internal divisions — there was work toward changing this, at least, in Geneva.