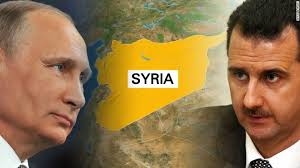 On the eve of a strategic conference with Russian ambassadors, Russian President Vladimir Putin is searching for options for a political settlement in Syria “that does not lead to a shock or vacuum” in the Syrian regime, and “tames” its allies in Damascus and Tehran. Meanwhile, the Iranians offered the Americans and Europeans a “deal” connecting a ceasefire in Syria to lifting some sanctions on it, amid increasing reports of diverging priorities between Moscow and Tehran.

The international envoy, Staffan de Mistura, notified the UN Security Council that the “Syrian dilemma” lies in how to realize a meaningful political transition that cannot be reversed without creating shock, alarm or disaster in the Syrian regime, and that he will not call for a resumption of peace talks in Geneva in the current month in hopes that favorable conditions will be provided for them to resume in July. De Mistura said in Geneva late last week that the possibility of holding a new round of negotiations will become clearer after the Security Council discusses the various options on June 29.

He added that he was with the United Nations Secretary-General Ban Ki-moon during a visit to St. Petersburg last week, where he held an “extensive and comprehensive meeting” on Syria with Russian President Vladimir Putin and his Foreign Minister Sergei Lavrov. The American Foreign Minister John Kerry, who invented a new term in the Oslo forum — supporting a “transitional national unity government” (rather than saying a transitional authority as Washington had been demanding, or a national transitional government, as desired by Moscow, Tehran and Damascus) — did not seem enthusiastic about resuming talks unless Russia carries out substantial matters in the next 10 days.

According to reports, Putin feels that he is at an “impasse,” and that the search for options for a political settlement in Syria must be accelerated, because it is stuck between diverging military and political priorities with Tehran and Damascus and the lack of obtaining “solid understandings” with America and its allies in the region. Therefore the Russian president is approaching the moment of truth which demands either increased military involvement and understanding with its allies, or pressure for a political solution.

The Russian, Syrian and Iranian defense ministers held a coordination meeting in Tehran, in which a difference in priorities emerged between the desires of Tehran and Damascus in “regaining Aleppo completely” and proposing to make a comprehensive military strategy to realize this aim within the regime’s efforts to “regain every inch of territory.” While Moscow is sticking to at most trying to “besiege” Aleppo for reasons connected to its conviction that the regime’s army does not have the ground strength to “retake all territory,” and to understandings at a minimum with Washington and the need “not to mobilize regional Sunni countries because regaining Aleppo will demand a massive human cost.” But Moscow does not object to retaking the city of Jisr al-Shoghour to provide protection to the regime “heartlands” in the Lattakia countryside, overlooking the city of Idleb, under the control of the Army of Conquest.

The difference in priorities between Moscow and Tehran explains why Russian warplanes have not provided air cover to regime forces and allied militias in the battle for the Aleppo countryside. It also explains the symbolism of the meeting between the Russian Defense Minister Sergey Shoygu with President Bashar al-Assad and the tour of the military base in Hemeimem (Lattakia) to push toward putting the actions of the regime forces and its allies under Russian priorities, in addition to the need to recall that “Russian military action in Syria aims to reach an acceptable political settlement with the local, regional and international players,” according to the Russian ambassador in Damascus, Alexander Kinshchak, speaking to a number of Syrian officers and political officials during Russia Day on June 12.

But the Russian “frustration” with Damascus and Tehran has not reached the point of estrangement, because differences still exist with Washington. That has been expressed to the extent of military tensions when warplanes of the two sides came close to clashing when Russian shells bombarded an opposition faction fighting ISIS and receiving American support near Al-Tanf crossing on the Iraqi-Syrian border, according to reports.

Moscow repeated the same position that it must be given data and locations where the factions supported by America are in order to not strike them, which means pushing again for deep cooperation between the two armies, which Washington does not want. In addition, there is a belief in Moscow that America “has not been resolute in its decision to strike the Nusra Front as it is doing against ISIS,” which Moscow demands.

There is a belief that Putin, who has not obtained what he wants from Washington in Syria and other parts of the world and sees himself as “targeted by the West,” missed an opportunity to put the regime and Iran under the Russian strategic blanket when Damascus and Tehran were shocked by his decision to “withdraw the deployment” of his forces and warplanes in mid-March but did not complete the shock with subsequent steps.

At the same time, there has been “resistance” from Tehran and Damascus. Voices of criticisms have begun to rise against Russian policy. An Iranian official said in a closed meeting that “The Russians are in the air and we are on the ground, the Russians came from far away and we are children of the region. Therefore, we are staying and holding on to the territory, and we will win.” The Iranian Foreign Minister Mohammad Javad Zarif, who has admonished Russia more than once and said that he heard about the decision for the military withdrawal from the American foreign minister and not from his Russian counterpart, is meanwhile trying with Iranian military leaders to reposition in Syria in a way that makes clear Russian’s need for Iran in every step, from delivering humanitarian aid, to ceasefires, to the political track.