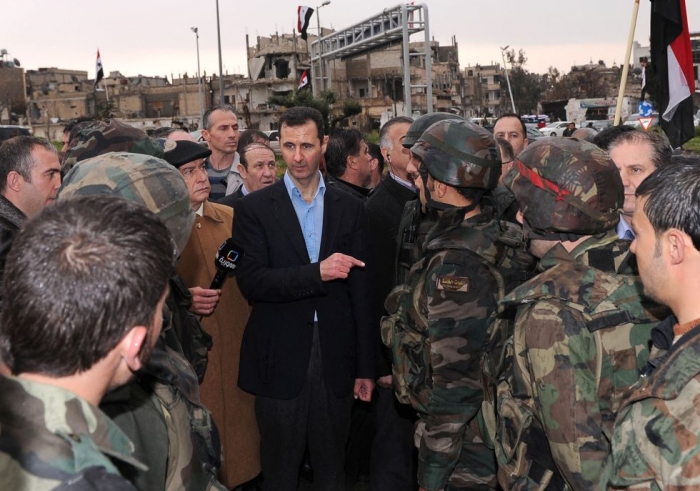 As Max Weber once wrote that the state is the legitimate use of physical force, he was inevitably preoccupied with a force able to guarantee the social contract, and could not imagine violence like that practiced by the “state” in Syria, or which this “state” has brought in from abroad in its war against Syrian society. We say this in light of the evolution of this “monopoly” of violence in Syria into crimes carried out against Syrians, individuals and groups, and against humanity as well. But because of the standard social, political and international relations conceptualization of the terms “state,” “regime,” “sovereignty,” and “security,” in total we still expect the hand of this state when violence occurs, and so we accept its violence no matter how sharp or severe the crimes, and resort to justifying it. Indeed, it seems to me sometimes that the concept of the state has come to satisfy people — and not exclusively Arabs — so much that everything that the state does is accepted. This includes the destruction, killing and excessive violence of the Syrian “state.” Moreover, we see this state drawing in the violence of other states to prevail and dominate.

Regarding this sort of scene, anarchists have established a rhetoric based on criticizing state power and its monopoly of “legitimate violence” perhaps because they, unlike Max Weber, felt the consequences of this violence and its atrocities in the Nazi and Stalinist cases. What they wanted was a legitimacy within boundaries, which prepared the theory that the citizen could legitimately raise arms against the state if it violated his rights. There is a limit to obedience and compliance, especially when the state — through the regime — definitively violates the basis of the social contract, freedoms, and rights. From here these legal and philosophical theories around the cases in which the violence of individuals against the state gains legitimacy are also part of international custom.

The United Nations’ institutions were supposed to decide and rule on the extent of the legitimacy of particular acts of violence, and they have done so in the past, either through mediation or through the use of violence to confront the violence of regimes or states (for example in former Yugoslavia, Rwanda, Libya, Iraq, and so on in a long list). But to a far greater degree, it has not used violence in cases in which it seemed that the “state” has resorted to excessive violence that falls outside the realm of the social contract and into the realm of war crimes, genocide, and ethnic cleansing. It is notable, for instance, that the international family has intervened against ISIS and its projects in Iraq and Syria, but it has not intervened to protect civilians and prevent war crimes as much as it has intervened to protect its own interests. It has never intervened to stop the state/regime’s war in Syria against Syrian society, or to stop the bloodthirsty minority regime’s war against the majority in Syria. It has not moved a finger against the regime’s recruitment of mercenaries or a minority-based security apparatus into the armed forces, or the regime’s deployment of those forces into the war against Syrian men and women.

And so Syria remains in a destructive war free from intervention by the international Security Council, which was originally founded on the principle of intervening against states to protect their societies from them, or to protect states from other aggressor states. Syria is a strange exception, and it must be noted that the level of violence “achieved” by Syria’s bloodthirsty regime has reached the level of extermination, war crimes, scorched earth, and using internationally-banned weapons. The state/regime in Syria has exceeded every boundary and law that the Security Council uses for intervention. Nevertheless, state violence continues and escalates. It is estimated that 95 percent of victims and destruction have occurred at the hands of the regime and its allies. Indeed, the waves of killing by ISIS and other nihilistic Islamic factions has left only a small number of victims compared to what the Syrian state has done against its people. Still, there is intervention against ISIS, and not against the state of the Syrian regime! This is not because there is mobilization against ISIS, however, but rather international complicity with state violence in principle. We have seen how the ISIS scarecrow is used in order to undermine the most promising military and civilian revolutionary forces in Syria.

Maneuvers like this in the framework of international relations have opened gaps in human history to record some of the most atrocious possible scenes of human genocide, the destruction of entire cities and civilizations, and the ethnic cleansing of countries. Here I hope for the failure of the coalition of the regime, Russia, Iran and Hezbollah in Aleppo, and the victory of the city over tyranny, though I do understand the current balance of power. However, such a victory could have an impact, and could have a butterfly effect on the map of alignments of nations and forces in Syria, because the issue is not ISIS at all, but the violence of the regime/state which, since the very beginning, has gone well beyond war crimes.