Russia and the United States have not yet agreed on dividing influence in the Middle East, and they are providing space to the regional countries to dive further into this quagmire 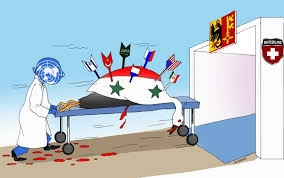 The failure of the Syrian Geneva talks was not a surprise, and their postponement, time and again, has no relation to the breaches of the ceasefire in Aleppo and the Ghouta, or the warring parties’ lack of adherence to the announced truce. The basic reason is that Russia and the United States have not yet agreed on dividing influence in the Middle East, and they are providing space to the regional countries to dive further into this quagmire. Everyone has his objective. Moscow is trying to cement its position in the region with ambitions to revive a very old imperialist strategic project including establishing a political-military alliance or agglomerate, extending to Tehran, Baghdad and Damascus.

This project has faced many obstacles. In the 60s and 70s, Turkey, the Shah’s Iran, and Israel were a barrier to achieving it. After its revolution, a weakened Iran was not ready to cooperate in carrying it out, in addition to the breakup of the Soviet Union at the beginning of the 90s, and the independence of the Asian nations who had been in its orbit and turned toward the West and permitted the United States to set up military bases. Today Putin sees a favorable opportunity to revitalize this dream through strong relations with Iran, the civil war in Syria, sticking with Assad, and neutralizing Turkey, which fears the establishment of a Kurdish state near its borders.

Washington confronted this project by strengthening its alliances in western Asia, the Caucasus and the Middle East, and establishing military bases there, while surrounding Iran after the revolution and considering Syria part of the Axis of Evil. It struck Iraq and brought down its regime, after exhausting it with the first Gulf War. It removed the markers of its state to establish a loyal regime, dependent for its survival on political and military aid which it provides in order to not fall into Tehran’s arms without antagonizing it and so as not to open up to Damascus and its old dream (since the days of Assad the father) in connecting with Moscow through this strategic line.

Based on this thinking, the United States and Russia have met in Syria, and based on this background Kerry and Lavrov have held discussions. They have still not found grounds for agreement. Robert Malley, the coordinator for Middle East, North Africa and Gulf affairs in the White House and an aide to President Obama, said that “The Russians have said they don’t oppose a political transition [in Syria] but want to avoid a situation in which state institutions collapse, the country breaks apart, or jihadists take over. They also assert they want the cessation to be respected but don’t want Nusra to take advantage of it. We agree on both points.” He added that: “If Russia does not mean what [it says], or if [it] cannot get the regime to do what it must, we will not have sacrificed anything.” He said that Washington was trying to cooperate with Russia to achieve shared aims, but if this cooperation fails, “support for the opposition will go on, and the regime will not prevail.”

Malley did not say what the shared interests were, or how they would define them, and so the two points that he spoke about (the political transition and avoiding the collapse of the state) are not enough to end the war which has begun to reach neighboring countries, especially Turkey. It is also unclear how the two countries can reach a mutual understanding about the solutions to complicated crises, from Ukraine and Georgia, Syria, and beyond.

All indications suggest that the sectarian and ideological wars will continue in Iraq and the Arab eastern regions. Moscow is not ready to give up its dream of the strategy line through Damascus, Baghdad and Tehran, and Washington is not ready to leave the region. Indeed, it has returned with strength after an isolation which did not last long, while the war between the “Yankees” and the Red Army is not likely.