Following the recent Turkey-Iran-Russia strategic alliance, Assad sought to find a role to play in the Kurdish file, choosing to strike Hassakeh in order to be at the center of the Kurdish issue 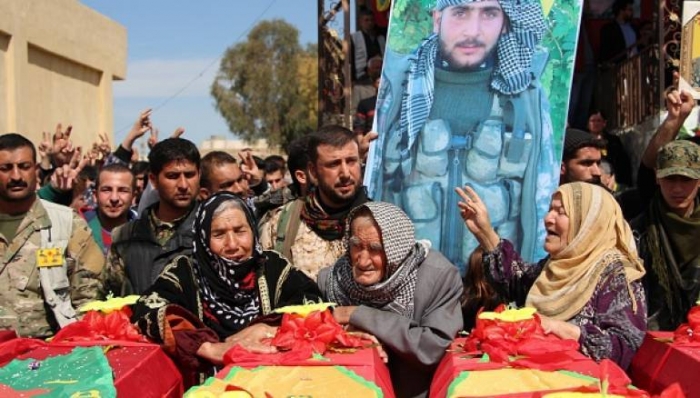 On the day the regime airplanes bombed three locations for the Kurdish People’s Protection Units (YPG) in Hassakeh on Thursday of last week, the Turkish President Recep Tayyip Erdogan was promising the supporters of the Kurdistan Workers’ Party (PKK) with punishment. Five days prior to the bombing, in an indication to the Democratic Union Party (PYD) and its military wing, the YPG, Iranian Foreign Minister Mohammad Javad Zarif and his Turkish counterpart Mevlut Cavusoglu announced their hostility towards the Kurds in Syria.

At the heart of this political move, after the increased closeness of Russia, Turkey and Iran, especially after Zarif’s visit to Ankara and the opening of Iran’s Hamadan airbase for Russian fighter jets, President Bashar al-Assad sought to find a role he could play in the Kurdish file, choosing to strike the Kurds in order to be at the center of the Iranian-Turkish intersection in the Kurdish issue. This is not surprising, especially as the Iranian and Turkish ministers affairs agreed unanimously that Turkey’s security is Iran’s security, and vice versa.

It is not clear if Russia is at the heart of the Iranian-Turkish intersection against the Kurds, as the representative of the Democratic Union Party Ali Abed al-Salam still represents the party in his office in Moscow. Although Russia will consider the relationship an attempt to weaken the American role in supporting Kurds, and in this case will be undeniably happy.

In a meeting with the political commission for the Syrian National Coalition on August 10, US envoy for Syria Michael Ratney asked Syria’s opposition to speak to the Democratic Union Party in order to create a sturdy network, from the American point of view, with the ability to influence a confrontation towards the regime’s hegemony over the regime’s decision.

When Syrian regime fighters launched strikes against PYD locations, Washington understood that the attack was a message to the US since it was a strike against the Americans’ trusty ally against the Islamic State. The day after the attack, Pentagon spokesperson Jeff Davis hastened to send out clear messages that his country will protect the areas controlled by the YPG, and that Assad must understand the forces which were targeted are fighting the Islamic State, warning Assad to exercise caution as the US has forces stationed in these areas. One American official went even further, saying that Assad will lose his planes if he attempts to repeat the move.

Here, the regional and international understanding about approaching the Kurds became clear. The Turkish-Iranian accord places Assad as a servant with his airplanes, as the US fears for the survival of an ally amid the regime’s strikes at the height of its battles with the Islamic State.

Over the past five long years, the PYD’s military and political ideology was based on a policy of non-confrontation towards Assad’s forces, as long as the regime agreed to avoid crossing certain lines in line with an undeclared truce.

This ideology was further entrenched as the PYD’s number of enemies increased, with Turkey, Nusra Front, and the Islamic State, as well as some of FSA factions. As a result, the PYD held onto its strategy of neutrality on the basis of Prussian general Carl von Clausewitz’s theory of those who fight on all fronts lose on all fronts.

In his strike against the PYD, Assad synchronized his actions with the Turkish speech tying the Democratic Union Party to the outlawed Kurdistan Workers’ Party. In the best case scenario, Assad’s actions are an offering for any settlement at the Syrian level on the basis of his role in breaking the backbone of the Kurds to satisfy Turkey and anger the United States.

If there is a role for Assad in this settlement, then a Kurdish confrontation with the regime is coming without a doubt. The regime’s change of policy against the Kurds is a carefully timed message, the full features of which will be revealed in the coming period.