Aleppo chanted for freedom and democracy, and even raised the banners of the Ukrainian revolution and supported all the national liberation movements around the world, but the "free world" has turned away from it. 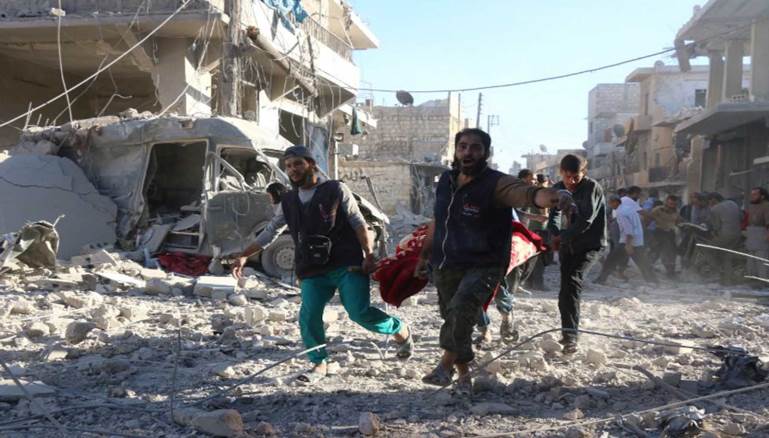 This question triggers a long series of further questions and forces one to dig deep into memories to bring back many facts in order to help answering it.

Aside from the regime's official story, the revolution is real, and mistakes do happen, but repeating them, disregarding them and perhaps glorifying the people who committed them is the real dilemma.

It is safe to say that Aleppo did all that can be done to topple the regime, and offered everything. However, since the beginning of the revolution, the world agreed on, or maybe turned a blind eye to toppling the revolution and destroying Aleppo. This is happening while leaders and allies are standing helpless and unable to offer solutions or achieve anything at all.

In 2011, everyone cursed Aleppo and accused it of siding with the regime, and everyone, including world leaders and governments, called on its people and the people of Damascus to join the revolution. This was "before the world was demanded upon to interfere to protect the rebellious cities from the cruelty of the regime." This was what a Turkish official said that year, even though the political and economic capitals were doing everything they could under the firm security grip of the regime.

Despite everything, the people of Aleppo made extreme efforts. The activists who managed to retain their freedom and lives remember their friends who were willing to sacrifice their lives in order to expand the movement in the city, thinking it was the way to rescue the other cities and topple the regime. Their lives were sacrificed, but their dreams did not come true.

Later, Aleppo opened its doors to the FSA that entered the city in July 2012, after many disagreements about such a move that were settled by what is said to be Turkish and Arab promises delivered by the opposition leaders. The promises confirmed that controlling Aleppo, or even a part of it, is the gate toward the international interference against the regime, just like what had happened in Benghazi in Libya.

The rebels managed to control over 70% of the city in just a few days, and controlled the whole countryside, which left the regime with no supply routes, and they were also able to siege the regime's military bases and airports, but none of this helped in changing the world's positions.

The opposition factions in Aleppo allied with PYD in the Sheikh Maksoud neighborhood, but they were still unwelcome. Then they confronted the PYD and were called racists, but the shelling and death didn’t stop.

The Nusra Front left Aleppo toward Idleb, but still Turkey was not allowed to create a "safe zone" in the north, and the shelling continued. Then they returned to Aleppo under a new name, so de Mistura said, "Half the fighters in Aleppo are members of (Fateh Al-Sham)."

The factions in Aleppo have united many times, but they were besieged and cut off from military supplies. Therefore, they separated and fragmented but this has only made things worse for them.

Aleppo chanted for freedom and democracy, and even raised the banners of the Ukrainian revolution and supported all the national liberation movements around the world, but the "free world" has turned away from it.

It has chanted for Arabism and Islam and demonstrated for Gaza and Rabaa Square in Cairo. It has supported the Saudi operation in Yemen, and the Rohingya people in Myanmar and the Muslims in Central Africa, etc., but nothing has changed.

The banner of revolution was raised for too long in the city, and it was burnt several times too, but still nothing has changed.

Aleppo was divided between the opposition and the regime. Then it was divided among the opposition, the regime and ISIS, and later among them and the Kurds. It was attacked by Hezbollah, Russia and Iran. It is besieged and being terminated and the allies do nothing but give promises about new weapons they will deliver to the rebels, including promises of anti-aircrafts missiles.

The people of Aleppo know of course that these promises are just new lies. However, the question that is being asked is how will the weapons reach the trapped rebels if the world cannot even bring some food shipments inside the city?

No one entrapped Aleppo, as the demands for freedom and dignity and sacrificing for them cannot be an entrapment. Otherwise, who had entrapped Daraa, Ghouta, Homs, Deir-ez-Zor, Lattakia and Hama?

The entrapment was not in the revolution itself, but rather in the actions of the leaders, friends and allies of the revolution, who did nothing for it while tired Aleppo did everything.