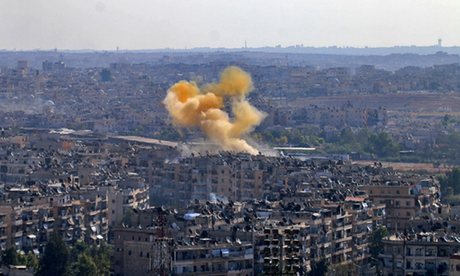 In the first hours of the launch of the “Great Battle for Aleppo,” the Russian president, Vladimir Putin, issued a surprise position, as he rejected the request of his senior military leaders to resume air raids on Aleppo. And although activists on the ground said that raids by Russian and regime warplanes continued on Aleppo’s districts and its countryside, the Russian announcement poses a number of questions about its timing and reasons.

Some observers believe that the Russian announcement about the halt of Russian raids on Aleppo was a diplomatic maneuver, contradicting the facts. They are completely right in this, however, what is the aim of this maneuver?

Regarding the timing, the announcement came as a surprise, as it coincided with the start of operations for the “Great Battle for Aleppo,” which was announced by rebel groups in the west and south of the city. It also coincided with the tripartite meeting which brought together the foreign ministers of Russia, Iran and the Syrian regime in the Russian capital. The announcement came one day after announcements by the Russian president himself in which he spoke about the failure of his efforts to reach an understanding with the Americans for the cessation of hostile operations in Aleppo, and his emphasis on the continuation of bombardment in the city.

While Saudi Arabia has won the number of votes necessary to secure a seat on the Human Rights Council, Russia lost this gamble — that is, most of the world’s nations will not give Russia its needed vote to continue serving on the council.

In the same context, the refusal of Spain and Malta, under pressure from the NATO coalition, to supply fuel to the Russian aircraft carrier Admiral Kuznetsov, came as a new sign of the state of Western alert around Russia, which has begun to take on military dimensions, including with the entry of Western early warning aircrafts into Syria, under the pretext of “fighting the Islamic State group,” while Russian observers believe the aircraft aims to disrupt and spy on the Russian military presence in Syria.

There are other theories which discuss information obtained by the Russians about sophisticated weapons reaching Syrian rebel groups to launch a battle in Aleppo and foil the Russian plan to enter the city’s eastern districts.

Although this theory does not enjoy any evidence, except for the statements of Russian observers, it may be counted as a justification for Russian bombardment of the city under the pretext of the presence of Western military supplies to the rebel groups. However, the fact that these were issued shortly before the start of the Great Battle for Aleppo make them a theory which has been strongly put forward.

A third theory which circulated a little before the meeting of the Russian, Iranian, and regime foreign ministers in Moscow, is about a split between Moscow and the Assad regime, regarding the agendas in eastern Aleppo. Russia wants to cooperate with the Americans to implement a plan stipulating the removal of Fatah al-Sham (formerly Nusra Front) fighters from eastern Aleppo in exchange for agreement that the fighters from the “moderate groups” remain there while stopping bombardment, implementing a truce, and accepting the opposition local council as a party administering the eastern portion of the city. But the regime rejected this plan, and insists that it should include removing all fighters from eastern Aleppo, including those described as “moderates” — essentially meaning the evacuation of the eastern portion of the city of all fighters and, perhaps, of civilians as well.

In this way, the Russian announcement about the halting of air raids on Aleppo came as a means of pressuring the regime, according to this theory. However the start of the Great Battle for Aleppo may force Russia to resume its raids, despite its announcement otherwise.

With the increase in the number of theories, the most likely remain those that point to the limits of what Russia can reach in its confrontation with the West in Syria. Although the West was unable to agree on the severity of economic sanctions on Syria, mere diplomatic pressure was enough to make Moscow feel a burden.

Although Russia’s announcement of stopping the air raids on Aleppo is incompatible with the facts, according to activists on the ground, this Russian diplomatic maneuver, geared specifically toward the West, indicates the frailty of Russia’s ability to bear the costs in Syria.

In another sense, if the West had the desire to limit the Russian expansion in Syria, at least, it would have been much easier than imagined. However, what is most likely is that what is happening today is mere Western pressure on Russia to restore balance to the situation on the ground in a way which will prolong the crisis without either side gaining victory over the other, and in a way which increases and draws out the Russian military involvement in Syria, while at the same time prolonging the suffering of Syrians.

In this way it seems that the Russians in Aleppo are suffering from a dilemma making them unable to advance and unable at the same time to retreat. The question remains: When will the West offer a ladder for the Russians to scale down from the tree, as the Russians did three years ago when the chemical massacre occurred in the Ghouta? Or is the aim to give the Russians another Afghanistan lesson?