Naturally, Arab-Americans suffered their share of shock, a shock from which they may not wake up soon and will likely change the way that they interpret American society and the American reality. 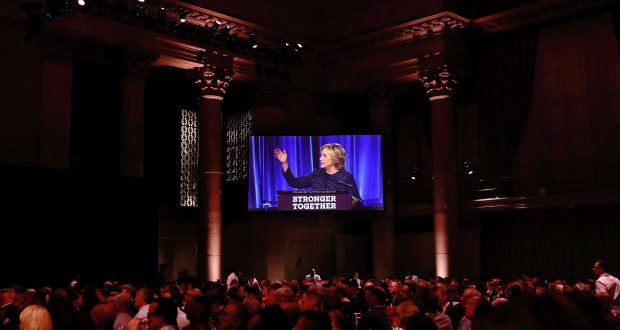 Since the start of his campaign, American President-elect Donald Trump chose a clear strategy in which he depended on addressing his voters by speaking to them in what appeared to be the language of the streets — a language which fully expressed their fears. His facial expressions and hand gestures, which reflected human expressions of joy, anger or other emotions, as well as his unrestrained way of speaking in front of the cameras, were a departure from norms of political conduct. He portrayed himself as a child of the streets — and not just any streets, but streets that brim with madness and confusion, and often with hatred and anger, chicanery and deceit.

Trump, through the style he chose for himself, comprised a shock to the American political elite — even those who are members of the Republican Party which nominated him. This shock repeatedly pushed his party to consider cutting off funding to his campaign, or even cutting off support entirely, and instead focus on winning Congress.

In fact, the Republican Party, which knew Trump better than any other organization, wanted to dissociate itself from the facts which Trump had, for the first time, revealed to the entire world about the mood and reality of the American people. Perhaps they did not believe in Trump’s view of American society and were closer in their opinions to those of the US elite regarding “the greatest people on Earth.” With Trump’s victory, however, the elite who ridiculed him and made light of the way he spoke and acted, have been overwhelmed.

On the other hand, the Democratic Party’s choice of Hillary Clinton as their candidate was a very different approach, one characterized by the maturity, reason and wisdom which she displayed during the direct debates with Trump, and which raised her ratings in the polls each time. However, Clinton stumbled into the hole which Trump had dug, and was unable to resist the populist aura he had created, even if he was nothing more than an expression of the muck at the bottom of the democratic swamp, as the German magazine Der Spiegel put it.

Clinton lost because she departed from the field of wisdom and maturity she had created and entered the field of instinct and began relying upon publicizing the scandals of the wealthy, affluent businessman and womanizer she was running against, and began delving into the qualities of the presidential nominee.

Clinton’s dream of becoming the first woman to sit upon the throne of the world’s most powerful nation pushed her to follow instincts which Trump had mobilized, and led her to forsake some of the most important foundations of democracy by wading into a fight over the personal qualities of her opponent, despite knowing that knowledge of these qualities would not create a deep change among voters — especially given the experiences of her and her husband, Bill Clinton, as a result of his scandal with Monica Lewinsky.

In her campaign, Clinton depended on female voters. She directed her rhetoric toward them and assured them that her success would be a victory for women, not just for America. She demonized Trump and portrayed him as a sexual predator, a violator of women’s rights: a man who does not respect women’s roles in society and sees them as mere objects. However, Trump’s victory may say something about both women’s stances on Clinton and their ability to deliver a woman to the White House. Without a doubt, a sizable number of women voted for Trump. Were they persuaded by his rhetoric? Were they defending a sexual predator and accepting what he had done? Was Clinton’s vision simply not convincing enough? Were they unpersuaded about the role women would play with Clinton in the leadership of the United States? Or maybe a large segment of American women did not see the competition between Trump and Clinton as a competition between men and women and in fact held Clinton accountable for the mistakes of the outgoing American President Barack Obama.

Yes, Obama may have been a reason for the loss of the Democratic Party to which he belongs. This is mostly likely because his foreign policies made Americans afraid about the decline of its role in the world. It is likely that Obama’s support for Clinton in her recent campaign and his calls for Americans to stand with her as they stood with him, and his hint that she would extend his policies, had a role in alienating voters who were tired of the isolationism of the Democratic Party.

Amid the losses inflicted upon the United States today, the loss suffered by research centers and think tanks may be the most powerful, as they failed to understand the orientation of American society as Trump had understood it for months and knew how to play with it.

Trump’s win also proved the failure of American electoral technology and pollsters and showed the extent of the gap between the American political class and American citizens, and how they had lost the tools to understand their own society.

The recent elections may also have shown the wide difference between the masks worn by the world’s great nations and the reality — even at the popular level. Even as Trump was able to tear the mask from a large segment of Americans who announced their support for him, many continued to wear the mask in public and removed it only in the privacy of the voting booth. This may have been the reason for the contradiction between the polls, which showed Clinton winning in states like Ohio, for example, by a large margin, where Trump then went on to win in these areas by the same margin.

Naturally, Arab-Americans suffered their share of shock, a shock from which they may not wake up soon and will likely change the way that they interpret American society and the American reality. Analysis of Arab-American politicians, Arab activists in America, and even regular people, have revealed the extent of the illusions among this segment of American society, and may have revealed the extent of their misunderstanding about the truth of the society into which they were born. Certainly, they had been influenced by the idea of the American elite about their society, just as they were influenced by the portrayal of it in the media.

Before anyone could wake up from this shock, the new American president gave a balanced speech, unlike the style of his campaign, as if drawing the curtain on a long, staged performance, and telling the world that the mental storm had ended. We should now try to benefit from everything that has happened and begin working again today after this revealing voyage.