Despite the president-elect's promises to withdraw American power from the region and revert to a more isolationist strategy, history shows us that major changes in US foreign policy rarely occur with the rotation of presidential administrations, writes Eyyad al-Jaafari 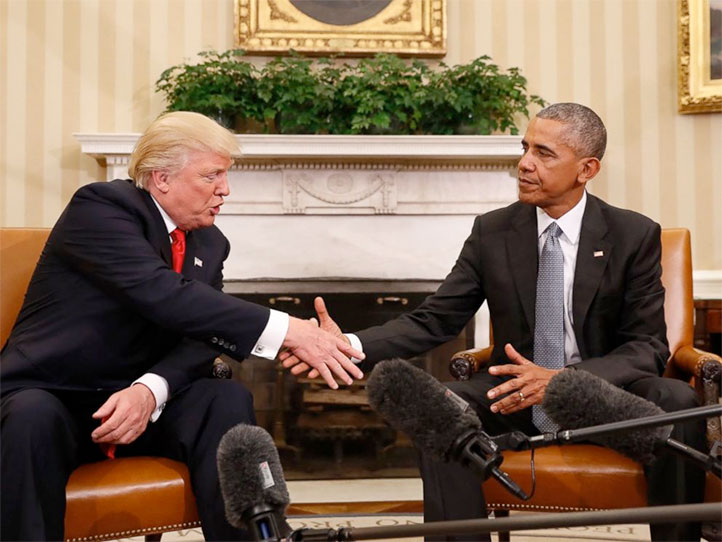 The statements of the American President-elect, Donald Trump, throughout his campaign and after his election suggest that he will strengthen the isolationism pursued by Barack Obama in his country’s policies, specifically regarding Syria, leading to a strengthening of Russian influence in the Levant region.

And yet an in-depth review of the history of US foreign policy leads to another conclusion — that emerging external constraints are what imposes the shape of the policy he will adopt around these challenges, and not the opposite.

At the same time, Trump has talked of stopping the armament of the Syrian opposition and focusing on fighting ISIS, in cooperation with Russia. It seems that challenges such as the extension of Iranian influence in the region and the need to restore trust with Turkey will, perhaps, impose on Trump a change in the milestones he set up for his positions regarding the conflict.

To begin, let’s acknowledge that Trump offers a reading tending toward isolationism in American foreign policy. But who says that Obama was not isolationist in this respect. Regardless of his perceptions about his reign, Obama, on the whole, isolated America from the conflicts in the Middle East, except when he was forced to get involved, more than once — and militarily, at that.

History shows that during the era of US Democratic President Franklin D. Roosevelt, isolationism reached advanced stages, when the reasons for the United States getting involved in World War I were studied to avoid repeating this involvement. Although Roosevelt understood the danger of Hitler, even before the outbreak of World War II, his isolationism dominated his reactions, and so he did not respond to the fears of his European allies. He settled for cautionary speeches as well as trying to accelerate a program of arming America. Subsequently, it was Roosevelt who helped involve his country, gradually, in the war. He imposed a blockade of oil and basic goods on Japan and committed the American Navy to fighting against German submarines which were souring the freedom of trade over the Atlantic. He also supported European allies, which led, eventually, to the conflict with Japan and Germany.

Roosevelt eluded American public opinion, which was divided, at the beginning of American involvement in the war, telling them: “Your boys are not going to be sent into any foreign wars.” America would go on to lose more than 400,000 American soldiers in that war.

Isolationism is a historical tradition at the heart of America culture toward the outside world, going back to the first American president, and supporter of isolationism, George Washington. However, the type of transcontinental challenges which have conflicted with American interests have always defined the response of the president and administration which confronts them.

It also seems to be a fairly stable feature in the history of US foreign policy that the response to foreign challenges by the American president and administration confronting them — even the dangerous ones — is slow, unless it is one which conflicts directly with American interests. However, once the extent of the danger becomes clear, the response accelerates, sometimes turning against the president’s policy itself, depending on the nature of the challenge.

This applies to Franklin D. Roosevelt, who was dealing with the danger which Hitler posed in a delayed and slow fashion, only to later become the most prominent American policy hawk pushing his country toward war against the German chancellor. This feature was also demonstrated during the time of Harry Truman, who initially was less aware of the Soviet danger than America’s European allies. Truman’s administration was not influenced by the infamous letter of an American who was working as an adviser to the US ambassador to Moscow, in 1946: This diplomat was George F. Kennan, who advised his administration in Washington to contain the Soviet expansion around the world with “counterforce.” A year later, in 1947, the danger of the Soviet push to the Americans became clear, and the United States decided to take up the reins of curbing this push, specifically, toward the Middle East and its petroleum resources. Truman himself was the patron of the Cold War between what were the two global powers at that time.

It also seems that it is a fairly stable feature of American foreign policy, as well, that this policy does not change toward specific issues with the changing of presidents and their administration, unless the nature of the challenges in these specific areas changes as well. As an example, Eisenhower, Truman’s Republican successor, did not change a great deal of the American strategy to confront the Soviet push around the world. Despite the slogans they raised, which talked about moving from containment to deterrence. The American policy which Truman established to confront the Soviets did not change in the ‘60s either, but indeed reached its peak in the Vietnam War. The setback in Vietnam caused a lasting weakening of American power during the ‘70s. The American economy was financially strained, forcing authorities to reduce the value of the dollar, and, as a result, steps toward American openness with the Soviets and China — of which Henry Kissinger was the patron. This culminated in the era of Jimmy Carter, who produced an ideal policy, betting on resolving crises in a more ethical fashion. In another sense, American policy toward the Soviets changed along with the changing nature of the challenges in this area, and not with the change of president and their administrations.

What is notable in the history of US foreign policy is that it does change around specific issues even when the president himself and his administration remain, when the nature of the challenges in these areas change. Carter’s tranquil policy was confronted by a Soviet expansion which pushed him to be more assertive at the end of his term. He was followed by Reagan, who in his first term was a hawk regarding confrontation with the Soviets. Then, in his second term, after Mikhail Gorbachev rose to power in Moscow with his conciliatory approach to the West, Reagan flipped to become a man of peace.

Based on the above, the challenges which conflict with American interests in Syria are the same and have not changed. We therefore cannot expect a qualitative change in the coming American administration’s policy toward Syria. But what are the challenges that could impose a change in this policy? The most prominent of them may be the existence of an opposition political force which has the ability to adequately present itself on the international stage in a way which forces the American administration to change its response to the challenges around Syria. These kinds of challenges are ones that Syrians — opposition groups, forces and figures — can implement, if they have the desire, in a way that could push the coming American administration to study its option for seriously cooperating with the opposition, as a united faction and decisive party on the ground in Syria which cannot be overlooked. Naturally, there are other challenges which could impact American policy toward Syria, however they are mostly beyond the control of Syrians and make them, in the end, into chips for foreign powers to play with but who do not get to play themselves. Except for the above — that is, if the challenges for Americans in Syria remain the same — the age of Trump, for Syrians, will be a new copy, with tactical amendments and nothing more, of the policy of his predecessor Barack Obama. There will be dialogue with the Russians, to rein in their expansion and benefit from their involvement, along with preventing any party from achieving victory, and ensuring that jihadis don’t predominate. These are the stable pillars of this policy.