Obama’s two terms and the lie of the bloody Arab Spring made us feel that George W. Bush was a dove of peace. Bush did not, in practice, destroy anywhere but Iraq, given that Afghanistan was already destroyed, whereas Obama went ceaselessly from Syria to Libya and Yemen. 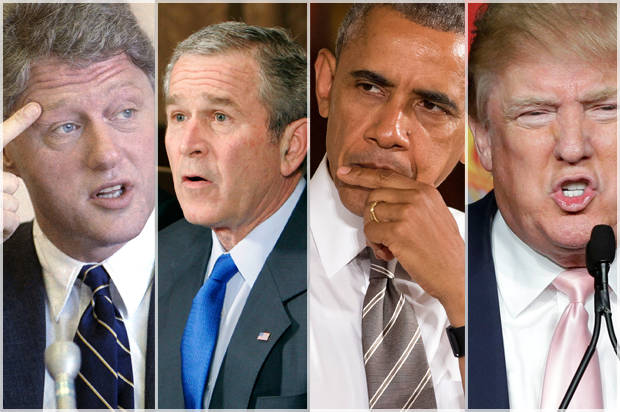 It is the last Sunday of the era of US President Barack Obama. Just a few hours and the worst president in the history of the United States will hold the title, “former president." However, since his election he had held the title of the “necessary president,” because the United States, put plainly, had to change its bloody image after the wars in Iraq and Afghanistan. The formula of the black president in the White House was the foundation of this effort. However, what no one knew was that the black president would not change a single thing in the equation of the red history of American policies. How could that be?

Many may object when we say that President Obama’s two terms were the bloodiest in the history of the White House, saying that this title should instead go to George W. Bush. However, Obama’s two terms and the lie of the bloody Arab Spring made us feel that Bush was a dove of peace. Bush did not, in practice, destroy anywhere but Iraq, given that Afghanistan was already destroyed, whereas Obama went ceaselessly from Syria to Libya and Yemen.

Had even Israel been able to dream what Obama would one day accomplish in terms of fragmenting the area around it? To whose benefit is the destruction and devastation? Is it not Israel’s?

Since the signing of the nuclear deal with Iran, we have proposed a theory that the Israeli bluster around it is no more than a type of hypocrisy. Because Israel is pleased with it. The reasons for its happiness are many, most importantly that the logic imposed itself — if Israel was aware that they were able to wage war with Iran and what had been discussed regarding bombing Iranian nuclear reactors, it would not have hesitated or delayed. They walked a two-lane path: The first to get rid of the Iranian threat diplomatically, and second to get rid of what was the most important party of the Iranian threat — that is, the Syrian threat to Israel’s existence, because the Iranian threat is, practically speaking, zero, if Syria is wiped from the map.

Has ISIS accomplished Israel’s holy prophecy? The days passed and John Kerry himself acknowledged that ISIS was under observation in hopes that the “Syrian regime” would fall. However, that did not happen. When Kerry speaks, this implies that the Obama administration is the one that wanted ISIS and its brothers to be military arms for Israel in Syria. They wanted Israel to continue the “soft war” which the Democratic administration pursued: Urge them to fight themselves, so that we can follow along quietly…

But Israel’s leadership seemed in too much of a hurry, with the relationship between them and the “Syrian opposition” emerging into the open, up to the point of even providing Nusra Front with treatment in Israel’s hospitals, giving artillery cover for terrorists in Quneitra, and a series of bombings of targets in the heart of the capital Damascus.

It was notable that the strike on the Mezzeh Military Airport was accompanied this time by media bombardment, which even those who believed themselves to be in the same trench with the Syrian leadership fell into. The Israelis were desperate to confirm the theory that the bombing was accomplished by its aircraft entering deep into Syria and striking the targets, while the official Syrian statement said that bombardment came from northern occupied Tiberias (Galilee).

The gullible were caught in this trap, because what is the difference between an aerial bombardment and bombardment from outside the airspace? The difference is clear or, more accurately, all of this goes within the framework of the psychological war which, unfortunately, the enemy has mastered. The Israeli aim from this is clear: They want to play up the perception that Israel is able to enter with its aircraft whenever it wants. They do not only want to hit on the theory that Syria has become a state on the verge of collapse, but they also want to create popular discomfort about the Russian presence in Syria. They want to convince each Syrian of the theory that the Russians are able to manipulate him however they want — because where were the anti-aircraft rockets? And what is the use of their presence? The second theory circulated by reports was that the bombardment hit a rocket shipment. But if Israel really wants to look for rocket shipments, it needs to ask itself how Syria will transfer weapons to Hezbollah through aircraft! And if it was convinced that these types of weapons were transported by way of the Mezzeh airbase, then we need to congratulate ourselves on the naivete of our enemy and its informants.

Obama is going and a large number of governments which have been implicated in the war on Syria will go to. Only then will it appear that the Astana talks are just a space to delay those implicated in this war from lifting the white flag.