In Saudi-owned Al-Hayat, Ibrahim Hamidi breaks down the current struggle for representation at the upcoming negotiations as well as the tug of war around prioritizing the political and military tracks 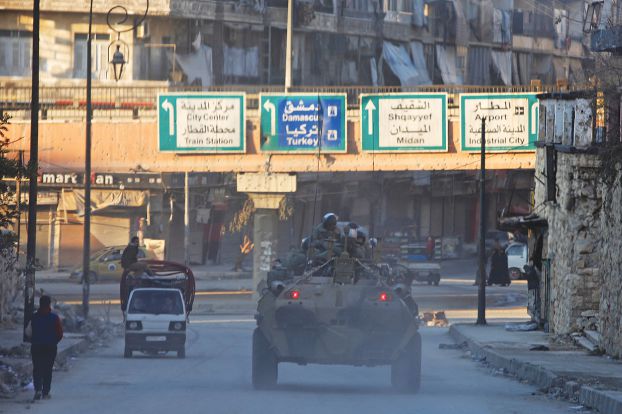 International and regional efforts intensified to find a solution to the "knot" of Syrian opposition representation in the Geneva talks, expected to be held at the end of the month, by forming an opposition political-military delegation after the UN envoy Staffan de Mistura hinted at intervening in the selection process.

Meanwhile, preparations were made for an agenda for an Astana meeting between Russia, Turkey and Iran — and possibly opposition groups — indicating potential competition between the “military track” which aims to solidify the ceasefire, and the “political track” which includes a political transition.

After discussions with members of the Security Council, the Arab group, and the United Nations Secretary-General Antonio Guterres in New York, de Mistura yesterday held talks with the US Secretary of State Rex Tillerson two days after his confirmation in Congress amid expectations that the former Exxon Mobil chief will meet with his Russian counterpart Sergei Lavrov on the sidelines of the international security conference in Munich on February 17 and 18, in which de Mistura will also participate to mobilize support for the Geneva conference. The Geneva talks are expected to be held on February 20, although it is possible they will be delayed.

According to a Western official, some US State Department officials are currently unenthusiastic about accelerating the Geneva talks while they wait for the policies of the administration of President Donald Trump to crystallize around Syria and to define its concept of establishing safe zones near Jordan and Turkey, as well as the relationship of a political solution to fight ISIS and the possibilities of cooperating with Russia and if Syria will be a state to limit Iranian influence in the region. There exists a conviction that the Trump administration has given up on the principle of regime change. The Western official added to Al-Hayat that some US officials are holding off on the political process which Moscow is rushing to build on Astana and legitimize its political authority and exploit the transitional period in Washington. Therefore, Washington may prefer to leave the Astana track altogether and focus on solidifying the ceasefire and finding a monitoring mechanism, freezing the conflict between the regime and opposition forces and bringing in humanitarian aid through the track of the working group in Geneva.

In contrast, Russia has revealed its annoyance with the procrastination in holding Geneva, as its foreign ministry announced that Moscow is exerting its utmost efforts to encourage the UN to mobilize the negotiations, and considers “attempts to delay or postpone them unacceptable.”

However at the same time it looked into forming an opposition delegation as an alternative to the opposition High Negotiations Committee (HNC), which represents the largest blocs of military and political opposition. After Lavrov met opposition figures in Moscow on Friday, Mikhail Bogdanov, Russian deputy foreign minister, held a series of consultations in Oman which focused on settling the Syrian crisis, amid reports of a “national salvation conference” which the opposition called for to be held in Muscat if not in Damascus with international guarantees.

The general coordinator for the National Coordination Committee (NCC), Hassan Abdel Azim, told Al-Hayat that he was working on forming a preparatory council to hold a salvation conference in Damascus with international-Russian guarantees, which would resemble what was held in September 2012 to form the NCC and develop a “vision to consolidate the forces, figures and people who are hoping for a political solution and are rejecting foreign intervention and oppose accepting the regime staying on the path of tyranny and monopolization and are convinced it is not fair to carry out reform and change.”

It is expected that the NCC and the Syria’s Tomorrow Movement will be invited to this conference, led by Ahmed Jarba and the Kurdish National Council (which includes five parties), and the Syrian Democratic Council (which includes the Kurdish Democratic Union, and forces from the “Damascus declaration” and the Solidarity Party — which are licensed by Damascus), and the Cairo platform. If the conference is not held in the Syrian capital and Damascus rejects Russian guarantees, it could be held in Cairo or Muscat or another Arab capital, according to the decision of the preparatory committee.

However Abdel Azim refused to talk in Moscow about an alternative list from the Negotiations Committee to represent the opposition at the Geneva talks, because the HNC, according to his belief, includes the broadest possible representation of the political opposition and armed groups, albeit able to add representatives from the Syrian Democratic Council and figures from the Moscow platform.

The HNC recently criticized de Mistura’s announcement of his intention to form an opposition delegation, calling on him to instead focus on the negotiations agenda. The de Mistura team still hopes to hold the talks at the end of the month after pushing all parties to think about resolving the “knot” before holding the talks and forming a balanced delegation of militants and politicians to discuss the three-point agenda in accordance with Resolution 2254: First, forming a “non-sectarian representative authority” from the government, the opposition and other groups (not a “transitional authority”) to prepare for a “political transition” in accordance with Resolution 2254. Second, draft a new constitution especially after Moscow put its draft on the table. Third, hold parliamentary and presidential elections under UN supervision in accordance with Resolution 2254. The questions which the communications aim to find an answer to are whether the opposition and government delegations will be held directly and whether the three items will be discussed in parallel or sequentially.