Editor-in-chief of the pro-regime online newspaper admonishes the US president for continuing to support key regional allies and failing to back Syria, Russia and Iran's fight against terror in the Middle East 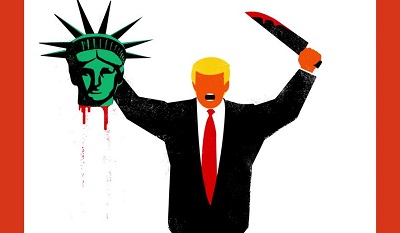 In the weeks following his inauguration, US President Donald Trump has declared some seemingly reckless policy measures. Trump's alliance with the regime of Saudi Arabia and the Israeli occupation indicates a continuation of US hegemony and the permitted egoist mentality of these states, who view themselves as leaders of the globe while covertly and overtly being led by the forces of exploitation.

Mr. Trump's business mentality so far seems to control his presidential behavior. His main and only preoccupation is money and only money! Arabs' oil should be America's! A blind eye should be turned to Saudi terrorism! Israel’s escalating war mongering, sword-rattling and erection of settlements should be encouraged! Syria's long fight against Western, US, and foreign-backed terrorists should be rewarded by so called 'safe-zones,' ignoring that safety prevails only where the Syrian army and its allied anti-terrorism forces exist.

It is too early to comment on Mr. Trump's policy, particularly with regard to the Middle East. However, with the motto “America First,” one can assume its regional allies including the Gulf and Israeli ewes will be blown up with more US air! But we should not forget that the more the US blows, the higher the chance the balloons will explode.

For Syria, Iran, Russia and all anti-terrorism heroes, saving a single human soul from terrorists means saving the globe. It is not money which controls our politics and fight against terrorism; it is indeed the sublime human rights and aspirations. Mr. Trump's advisors have to prepare a short political summary for him as to be acquainted with the reality of the ongoing events in this region! This alliance of anti-terrorism has endless springs and fountains of pure and sacred blood, uncontaminated by polluted American air.

Mr. Trump's cowboy and mafia-like threats do not frighten those who have every right to defend their sovereignty, independence and dignity. The Islamic Republic of Iran's pivotal role in fighting terrorism should be appreciated and considered, and not the opposite. We expect a constructive US role in fighting terrorism, or at least to console the bereaved people affected by the atrocities of Mr. Obama and Mrs. Clinton’s “moderate terrorists."

Hopefully, Mr. Trump is to work for the spread of peace, amity and fraternity among all global inhabitants. The globe needs the culture of communication and understanding, and not walls and sword-rattling. Middle East peace and UN resolutions, particularly 242 and 338, not to forget anti-terrorism resolutions, do deserve some US efforts, given its sponsorship of the halted Middle East peace process!