What is needed from the current Astana consultations is to "open the Syrian bridges to each other" and speak boldly about the problems facing those inside the country, Naim Ibrahim writes in loyalist newspaper Al-Watan 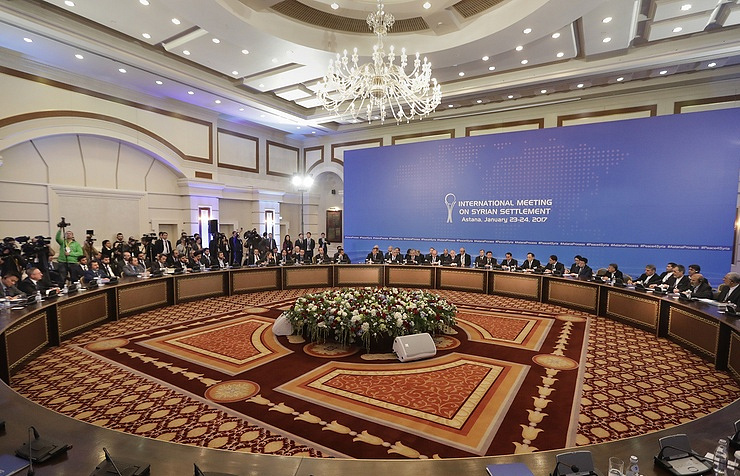 The eyes of the Syrian Arab people are turning to the third round of Astana meetings which began today, Thursday, hoping to see white smoke in the skies of the Kazakh capital after an announcement of a deal has been reached establishing a Syrian-Syrian dialogue without foreign interference.

No doubt what is wanted from Astana is complete adherence to the ceasefire across all Syrian territory with the continuation and escalation of striking terrorist militias such as the Islamic State grooup and Nusra Front, on the grounds that eliminating terrorism is the primary aim for all with coordination with the Syrian Arab Army and its allies.

What is hoped is that the Astana frost will make the meetings warmer for dealing with what is placed on the negotiating table, while giving priority to the public or the private on the issue of the aggressive international powers which adhere to the Zionist expression, "a good Arab is a dead Arab.”

No doubt that the Astana military discussions will pave the way for the political discussions in the fourth round of talks scheduled in Geneva, in which a broad array of Syrian opposition should participate within a single delegation without excluding any political component that has been implementing regional and international agenda, against the Syrian government delegation.

If some of those included under the wings of these political platforms — more of which are hatched every day — gamble on foreign powers, they will inevitably fall victim to delusions and will deceive themselves more than they deceive the Syrian people.

And so what is required in Astana before the Geneva meeting is to open the Syrian bridges to each other, continuing the previous rounds of deals and speaking boldly about the problems of Syrians and the need for collaboration in confronting terrorism and the American-Zionist reactionary plots against our country.

In order to properly address matters, Damascus should remain the first and last place for Syrian discussion, confirming the preservation of Syrian geographic and demographic unity … Syria (its people, army and institutions) … Syria resisting occupation and aggression in all its forms and methods … Syria, a pioneer in national and nationalist action … Syria, the promised future of development and modernity … Syria the great, in every sense of the word, from which a new world shall begin, in which there is no longer unipolarity and hegemony over its wealth and capabilities in its present and future… So take a lesson from Palestine, Lebanon, Iraq, Libya, Yemen and Sudan … the rope will be dragged along if this official Arab prostration continues before the projects of division and disintegration continues.

From Astana to Geneva, the message to Damascus is: Unity is strength and the resistance is our path to victory over terrorism and its creators and supporters, and bringing down the delusions and fallout in all its forms.