Kurdish displays of multi-directional alliances with Russia, Iran and the U.S. come as no surprise, as all sides, united in curtailing Turkey’s influence in the region, contemplate the preservation of an Alawite state 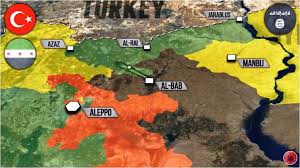 It did not come as a surprise that the Kurdish militias delivered a strip of villages adjacent to the areas under the control of Euphrates Shield forces to Assad forces, nor is it a surprise now that they share control over the city of Manbij with the Syrian regime. It is also not surprising that they raised the Russian flag in addition to their own banner, even as they continue to enjoy U.S. support.

The coordination between the Kurdish militias and the regime and its allies is nothing new. The Kurdish withdrawal to the benefit of the regime — or in accordance with its instructions — is not new either. What is new this time is that Russian and U.S. forces have come together in support of the Kurdish militias against the Euphrates Shield operation, or, rather, against Turkey’s declared intention of advancing to take control over the city of Manbij.

The question is whether all parties are cooperating in curtailing the Turkish role, and containing it in what looks like a border triangle under direct Turkish influence after that region played its agreed-upon role in preventing Kurdish militias from taking control of all northern Syria. Turkey’s satisfaction depends on its being reassured in this direction, a concern shared by Iran in its dislike of a Syrian Kurdish force encouraging Iran’s own Kurds. The Syrian regime is also afraid of the Kurdish militias stepping outside their prescribed role, especially in light of ambiguous U.S. attitudes.

The behavior of the Trump administration merits attention. The support for the militias against Ankara contradicts what it has stated about containing Iranian influence. The U.S. is certainly aware that the Kurdish militias are first following the orders of PKK leader Cemil Bayik in the Iraqi Qandil Mountains. It is well known that he is Tehran’s man and the real leader of the party’s forces in Turkey and its Syrian twin.

The behavior of the Trump administration in the issue of Manbij also predicts the expected trajectory of the battle for the city of Raqqa — Islamic State's (ISIS) de facto capital. It should not be surprising if the alliance enters into this battle to keep Turkey at bay to the advantage of the Kurdish militias and regime forces, with control returning to the latter in the end. It should be noted that the representative of the Trump administration played only an observer role in Geneva 4 and left before the end of the sessions, which reflects the dynamic behavior on the ground in the issue of the control over Manbij city specifically.

Turkish control over the cities of Al-Bab and Jarablus, as well as some of the northern countryside, may not have been permitted just to curb Kurdish aspirations. Moscow wants to barter this area for an active Turkish role in encouraging Islamist and opposition factions to make a settlement with the regime, which would guarantees its survival.

Some may consider this small area an expansion of Turkish influence. In fact, Washington and Moscow have done everything in their power to limit Turkey’s role in Syria since the start of the revolution. The consolation prize of the city of Al-Bab may allow Erdogan to save face domestically, but it is not equivalent to Turkish involvement in the details of the Syrian conflict and it strips Erdogan of regional leadership, something he had aspired to achieve through a Shiite-Sunni conflict in the region.

Perhaps what best summarizes the developments and fluctuations on this level is the move away from the old talk about sharp curtailment of regime control, and the regime’s shared conviction with its Iranian ally about establishing a defensible Alawite state and limiting the counter-project of establishing a Sunni-Arab state at Al-Bab — even if this is only a small part of ISIS leader Abu Bakr al-Baghdadi’s “caliphate.”