Contributing to Saudi-owned Al-Hayat, Elias Harfoush writes that the U.S.' recent change in tone toward the removal of Assad from power ignores important facts about the source of true terror in Syria and the regime's manipulative strategy for survival 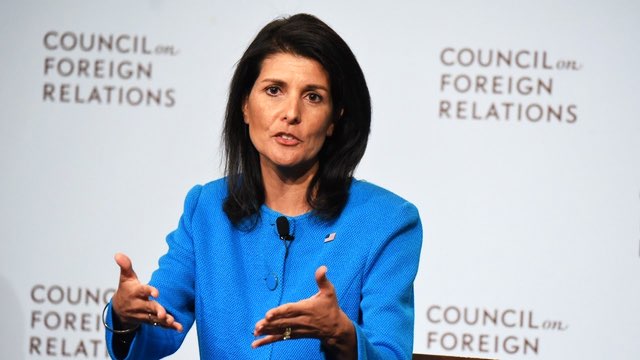 We can imagine that Syrian President Bashar al-Assad is happy with the new lease on life granted to him by the statements of the American envoy to the United Nations, Nikki Haley, and the statements of her chief, Secretary of State Rex Tillerson, who said the Syrian people should decide the future of their president.

Ambassador Haley does not believe that removing Assad from power needs to be America’s priority. Rather the priority, in her view, is “fighting terrorism.”

In both cases, Assad can consider himself the victor. He knows that the Syrian people of which Tillerson speaks of, who should decide the future of the president, are no longer alive. America’s top diplomat must have heard that half of these people are now in graves or in exile, or waiting at Syria’s borders to receive water or bread. The other half are fighting inside the country, divided along sectarian and religious lines after Assad succeeded in transforming a peaceful uprising against his rule into a civil war.

Ambassador Haley’s speech about fighting terrorism as a priority that precedes the demand to remove Assad from power also ignores two facts: First, that the terrorism she speaks of fighting in Syria was created by the Assad regime itself. A regime that imported terrorists from Iraq, where it had overseen their training and funding to fight the American forces, and then released the others from its own prisons. All of this for a single aim, which is to give cover to Assad’s war against the Syrians with slogans about fighting terrorism, slogans which are easy to market in the West. The regime succeeded in this tactic with the Obama administration and now the Trump administration.

The second fact which Ambassador Haley’s speech ignores is that fighting terrorism will not be effective in Syria without eliminating Assad’s rule. The criminal acts carried out by the regime are no less terrorizing than the crimes of the Islamic State (ISIS) and the Nusra Front, or others like them. What do we call the killing of people with chemical weapons or by throwing opponents live from rooftops, and slaughtering civilians by slicing their throats? And how is this different from the burning of people and beheading that Abu Bakr al-Baghdadi’s gangs do? The simple truth is that the crimes of the butchers working within the regime’s ranks are what opened the doors to all types of violations in the current war in Syria.

Ignorance is not the only way we can describe the statements of American officials regarding Syria’s future. There is also a glaring contradiction between these statements and the public aim of the Trump administration, which focuses on combating Iranian influence in Syria and in the region. Ambassador Haley herself says that it is imperative to “get Iran and their proxies” out of Syria. Fine. Does Haley not know that those she wants to remove from Syria are fighting to keep Assad in power? Does she not read the statements of Iranian officials and of the militias working under their umbrella, which confirm that their combat in Syria is what has protected the regime and are the reasons for Assad’s survival? Is there any role left for the Syrian people to decide the future of their president after all of the foreign interventions which have come to Syria to fight these people and prevent them from removing their president from power?

Barack Obama previously described the Syrian opposition as a group of engineers, academics, and professors who did not have the capability or power to bring down Assad. And here is Donald Trump now announcing that the aim of those same opposition to bring down Assad does not deserve support because the war against terrorism is the priority. Both cases are overshadowed by a disrespect for Syrian lives and their major sacrifices, which should only be a motive to form an international coalition to save these people and the region from this regime, and from any similar regime carrying out the crimes of Assad against their people.