Operations by the U.S.-led coalition to liberate Raqqa will not be enough as long as Assad and his regime continue their abuse against their own people, the real source of resentment which allows terrorism to thrive, Randa Taqi al-Din writes for Saudi-owned Al-Hayat newspaper 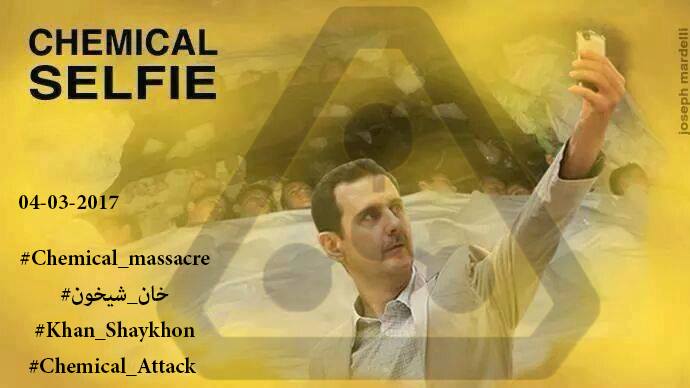 The images coming from the Idleb countryside are horrifying. The children of Khan Sheikhoun were bombarded by aircraft of their own country with sarin gas. The scenes circulating on social media sites of the victims of the poison gas cut one’s breath short. This violence and this barbarity which Syrian President Bashar al-Assad has used to terrify the people of his country in order to remain in power are what gave birth to the barbarity of the Islamic State (ISIS) and other terrorists spreading throughout every corner of the world. The bombardment of the Idleb countryside with chemical weapons is tantamount to what ISIS does in Raqqa and Palmyra and elsewhere. These terrorist movements which horrify the world were a creation of the regime which formed them and used them to threaten and frighten and terrorize. Let those who believe that Assad is a guarantor against terrorism wake up, because he is a terrorist himself. The truth is that there is no use in the so-called Astana and Geneva negotiations because they are dialogues between the deaf with an international envoy who cannot do anything to impact either party.

The operations of the coalition to liberate Raqqa from ISIS are not sufficient so long as there is another threat, which is the survival of Assad and his gang at the head of the state. Now that there is a great deal of talk that the world is warming to the idea of Assad remaining in power along with fewer calls for his departure, it should be noted that there was no ISIS before Assad and the American war in Iraq. The bombardment of innocent civilians by the Syrian air force with poison gas is no less than the aerial bombardment which destroyed Old Aleppo and cleared it of residents, just as it is no less than the displacement and expulsion of Syrians and pushing them into Lebanese, Jordanian and Turkish territory. Syrian terrorism was tested on the Lebanese in the civil war. After that, the heir, Bashar, excelled in continuing his father’s legacy in Lebanon and against his people without Hafez’s wisdom or preservation of red lines, or lines of return with those he claims are hostile to him, such as Israel and America.

The world is watching and waiting for change in administrations from the United States to France to Germany, and some are saying, as we heard rom U.S. Secretary of State Rex Tillerson and his ambassador to the United Nations, that the priority of the United States is not Assad’s departure, but the liberation of Raqqa. However, is it not an illogical sort of logic that calls for the liberation of Raqqa from the terrorists of ISIS and leaving it to the terrorists of the regime? A regime that has destroyed the country and put it under Iranian and Russian guardianship, and displaced millions of Syrians who are subjected to humiliation in host countries which can no longer bear the burden of these poor refugees. How can some Arab countries which fear the Muslim Brotherhood in Syria support the survival of Assad who, through his approach and his terrorism, has pushed the people of his country to extremism and resorting to outcast movements?

The time has come for some Western and Arab countries to become aware that the terrorism of ISIS is a result of the terrorism of the Syrian regime, which, contrary to what some in the West and a number of Arab capitals believe, is not guaranteeing an alternative to terrorist extremism, but is in fact creating it. The coalition which wants to liberate Raqqa must consider what will happen after this liberation. Who will take over Raqqa and administer it? The question is the same for all Syrian cities. You cannot leave the regime’s warring gangs, those who have destroyed the country and scattered its people and threatened and impoverished its neighbors, to dominate a number of areas and divide up the foul spoils of war. And what about the security situation in both Lebanon and Jordan? A Lebanese official recently commented to Al-Hayat that although the security in Lebanon is currently stable, who knows what will happen after the liberation of Raqqa and where the terrorist groups will go. The negotiations are not the solution because the regime is wasting time. The solution must be an American-Russian agreement for Assad’s departure.