With news of an agreement between big powers for a a safe zone in the south, the opposition is becoming aware that decisions on Syria's future are increasingly out of their control, Ali Ayed writes 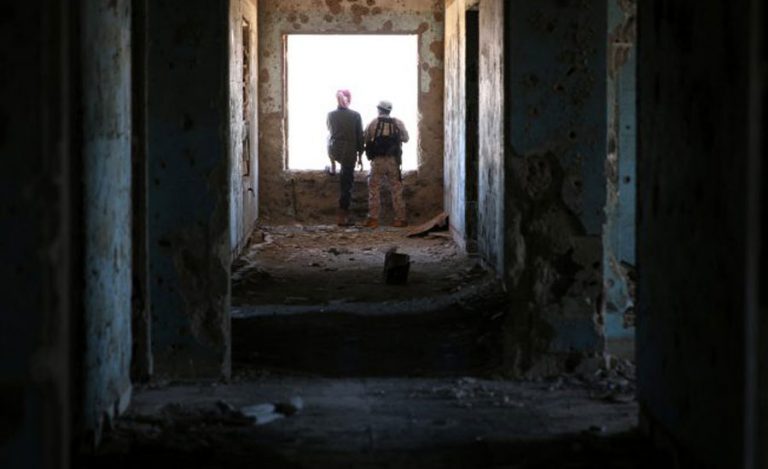 In a seeming extension of the “momentum” born of the American-Russian deal in southern Syria, French President Emmanuel Macron announced after his discussions with U.S. President Donald Trump that both leaders have called on diplomats to prepare a concrete initiative in the coming weeks regarding Syria’s future, while Trump revealed that there was a plan to reach a second cease-fire in the most difficult areas in Syria.

Macron said in a press conference with Trump in the Elysee Palace that the joint initiative was composed of a communication group including the five permanent members of the United Nations Security Council and a number of regional countries and representatives of the Assad regime.

Macron renewed his country’s new position in Syria, saying the French position on Syria has changed, and the main aim is to uproot all terror groups without the departure of Bashar al-Assad as a precondition, adding that “for seven years, we did not have an embassy in Damascus, and still we have no solution.”

For his part, the American president praised the cease-fire in southern Syria and said: “So by having some communication and dialogue, we were able to have this cease-fire, and it’s going to go on for a while. And, frankly, we’re working on a second cease-fire in a very rough part of Syria. And if we get that and a few more, all of a sudden you’re going to have no bullets being fired in Syria. And that would be a wonderful thing.”

Absence of the opposition

These developments, which continue despite the desire or even knowledge of the Syrian opposition, have caught it off guard without the chance to expression its positions or rejection of what is occurring, and leaving it no role to influence events.

In this context, the Syrian National Coalition issued a statement in which it specified its position on the southern safe-zone agreement, which was announced on the seventh of this month. The statement stressed that it was no alternative to a complete political solution in accordance with legitimate international resolutions, and called for there to be a halt to dealing with fragmented solutions outside the framework of the United Nations and its resolutions. The statement said that, “We cannot accept that the Syrian people and its legitimate representatives remain outside the framework of agreements and negotiations that affect Syria’s sovereignty and future.”

The Coalition said that the Syrian people were the first and most affected by terrorism and its various organizations, but that victory over terrorism could not be completed without addressing its causes and roots, most importantly the corrupt and oppressive regime, and creating a political solution which meets the demands of the Syrian people.

Regarding the change which has occurred in the positions of some of the Friends of Syria countries with regards to the Syrian revolution and to the head of the regime in Syria, the Coalition said that this fell within the framework of “rehabilitating the regime under the pretext of fighting terrorism.” While it welcomed any agreement which led to the end of violence, killing and destruction against the Syrian people, the Coalition stressed that this agreement “must be comprehensive for all of Syria’s geography, and integrated with the lifting of the sieges on Syrian territories and cities, allowing international aid convoys access and distribution, releasing all prisoners, revealing the fate of missing persons, the exit of foreign forces and militias, and the return of displaced people and refugees to their homes as a step which is not separate on the path to a complete political solution.”

It said that it had “a lot of fear and reservations around the southern agreement, most importantly that it established a rift between the areas of Syria in the north and the south and created another path far from Geneva and United Nations sponsorship and reinforced the areas of influence which are located in the country in various forms, while paving the way for forms of establishing rejected entities, fissuring Syria’s territorial unity.”

Observers believe that the Geneva process is no longer viable, as neither the regime nor the opposition are able to offer anything in this direction as long as essential issues are being discussed and decided upon outside Geneva. From a practical standpoint, there is no longer any need for agents to talk as long as the decision is not in their hands, and as long as it is possible that the “principals” — that is, American and Russian sponsors — can talk in coordination with active regional forces in Tehran, Ankara, Amman and Tel Aviv, there is no need for opposition and regime representatives to meet in Geneva, given that these marathon meetings will not produce anything while also losing their media luster.

While the greatest powers today are busy distributing shares and zones of influence in Syria, in light of the absence of any strong support for the Syrian opposition, the Gulf countries are preoccupied with their own crisis while Turkey is interested in trying to achieve its own interests and defend its national security against threats emerging from events in Syria.

For its part, Russia is trying to exploit some of the turns in international positions regarding Syria and the fate of Assad in order to pressure the Syrian opposition and push them to express positions in turn which are in harmony with these international trends.

This Russian tendency became especially clear during the recent Geneva talks, in which Moscow claimed to have brought about a change in opposition views in the interest of accepting Assad remaining in power, saying that the position of rejecting Assad remaining was an issue only producing what it described as extremists inside the opposition.

However, the general coordinator of the High Negotiations Committee, Riyad Hijab, responded to the statements of the Russian ambassador in Geneva and said that tweets from the envoy’s Twitter account claiming that the opposition delegation had offered concessions was “pure media fraud and a violation of professionalism and credibility.”