Writing for Al-Modon, Sataa Nour El-Din asks which army will assume the narrative of victory following the defeat of ISIS 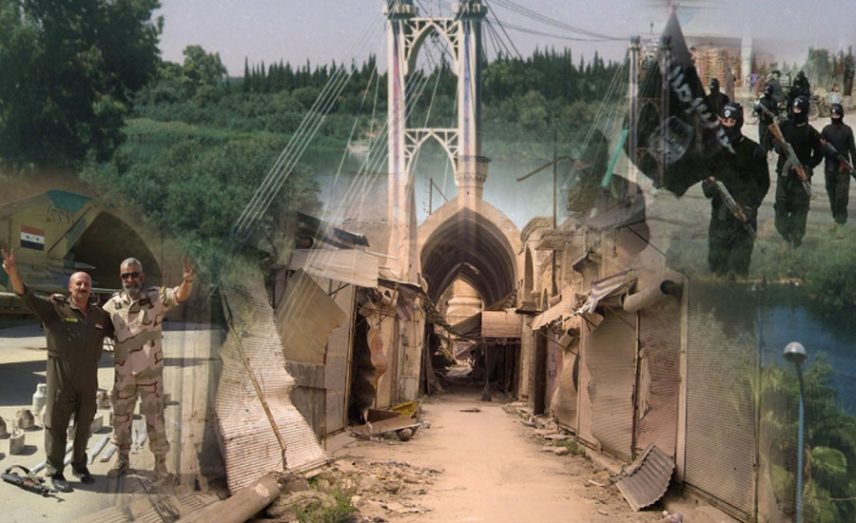 If the victory in Deir-ez-Zor is actually strategic, as it is likely to be, because it will clean out one of the last pockets of Islamic State (ISIS), then it will not be possible for one group to seize or control it, even if the declaration comes from one party rushing to celebrate it ahead of all its allies and partners.

On the ground in Deir-ez-Zor there was high-level military coordination. There was a joint military operations rooms managing the battle, which set the times for the launch of Russian missiles from the Mediterranean and prepared for Russian airstrikes against ISIS targets, as well as mobilizing forces and militias which have advanced to break the siege on the Syrian regiment which has been trapped for more than two years and to liberate the last meters of the Old City.

The plan was not a surprise nor were its results. For months, there has been an agreement that the Americans and its allies will clean out Raqqa and that the Russians and their allies will take on the task of cleaning out Deir-ez-Zor. There was a hidden race between the two sides to recover both cities before a deadline that does not exceed the end of this year. Moscow won in this race because the ISIS fighters in Raqqa are stubborn, and there is no longer any dispute that the Kremlin is the strongest and most reliable force present on Syrian territory.

There is not a competition in the precise meaning of the word. It resembled, and still does, a Russian-American military exercise against a terrorist organization to the rhythm of successive airstrikes from both sides. The exercise has contributed to breaking up the so-called caliphate, dispersing its forces and distributing its fighters between fleeing and suicide. Washington or Moscow can claim on their own that it is they who are the ones who eliminated this horrible terrorist phenomenon, or that they have fought the war together.

Within a few days, Washington can also announce that it has succeeded in the mission in Raqqa, when the door is opened to a pivotal question challenging both the Americans and the Russians at the same time: How to manage the post-ISIS stage? And to whom will this strategic victory be given, especially as there is no one in Damascus or Baghdad prepared to receive this precious gift and make use of its results?

The Kurds of Iraq and Syria are now the largest group coming to inherit from the Americans and Russians alike. The referendum scheduled in Iraqi Kurdistan on Sept. 25 is a first indicator, followed by Syrian Kurdish indications about northern Syria coming close to being turned into an autonomous region, connected with the Iraqi domain in the east and planned to extend toward the sea in the west. This is more of a U.S. dilemma than a Russian one, and adds to the Russian balance that it does not mind the possibility of an Iraqi or Syrian problem exploding in the face of the Americans every day.

In terms of the strategic outcome, there is no doubt that the Russians’ situation has improved, despite the major difference between ISIS forces in Deir-ez-Zor and their root in Raqqa. However, the victory which the Russians achieved yesterday is not free of challenges, most importantly that the entire world, without exception, was and still is giving Russia an official and unlimited mandate over Syria, provided that the Iranians leave and it gives partnership with them.

This condition was accepted about a year ago, when American-Russian relations began to enter into a new path, strengthened by the election victory of the Kremlin’s partner in the black market and money laundering, Donald Trump. At that time, it was possible for Russia to give up Iran, and give the Israelis a chance to liquidate their Syrian presence. Now, after relations between Washington and Moscow have soured in a way that brings to mind the worst phases of the Cold War, that option has become impossible, and the Iranian ally has gained the status of “strategic” according to the Russian Foreign Minister Sergey Lavrov days ago.

The Russians and Iranians will not differ in the division of this victory and will not hesitate to give some gains to the account of their junior partner, the Syrian regime, which refrained from announcing its victory weeks ago, but will not hesitate now from pursuing every one of the “defeated” — whether Syrian, Lebanese, Arab or even foreign.