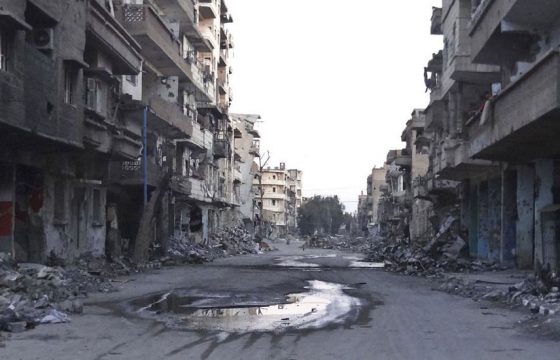 After the features of the American-Russian agreement have become clear, the possibility of three scenarios for Deir-ez-Zor province remain, which can be seen from the sphere of American influence (Al-Jazira).

The worst scenario: U.S. military and political messages could be a means of distracting the opposition with enticements while regime forces, backed by Russia, take control of the entire southern bank of the Euphrates River in Deir-ez-Zor province, and then cross it onto the northern bank to take control of the rest of the province and impose a fait accompli over opposition forces, which no longer have any window to fight in Deir-ez-Zor without U.S.-Turkish permission.

An in-between scenario: The United States could depend on the Revolutionary Commandos Army (Maghawir al-Thawra) in the Al-Shadadi area to lead Arab groups such as the Al-Nukhba Forces and the Deir-ez-Zor Military Council, with support from the Syrian Democratic Forces, to liberate the northern bank of the province and hand it over to a civilian council.

The least terrible solution: This scenario assumes the agreement of all Free Syrian Army factions (or most of them) to liberate the northern bank of the river, moving all its fighters there from the Al-Shadadi Operations Room with Turkey’s blessing, intersecting with its interests in not allowing the SDF to expand into other Arab areas.

It also assumes that Deir-ez-Zor’s political and civilian opposition forces are able to provide a model for civil administration acceptable to the United States, which will result in a liberated area with civilian and military administration by Deir-ez-Zor residents, with its borders the Euphrates River in the south and the administrative border of Deir-ez-Zor province to the east, west and north, under American influence, which requires not fighting the regime and good neighborliness with the areas under SDF control.

Deir-ez-Zor’s opposition has lost all its cards in the event that the first and second scenarios are implemented, but it is standing before a major gain if the third scenario is implemented on the condition of not fighting the regime. In this context, it has more questions to answer.

The revolution has never had a real national opposition to represent it, never searched on the national level for rational and logical interests able to be achieved, and has instead been plagued by an opposition whose main concern is to remove the Assad regime without concern for the method. Its Syrian National Council has tried to emulate the Libyan model and relied on escalation in its internal rhetoric, while begging for American intervention in its external rhetoric. Former U.S. AmbassadorRobert Ford has said on more than one occasion: “The United States will not intervene on your behalf.” The opposition has turned the Deir-ez-Zor rebels falling into the lap of the United States into the least worst option — even if it is the best in the eyes of some.