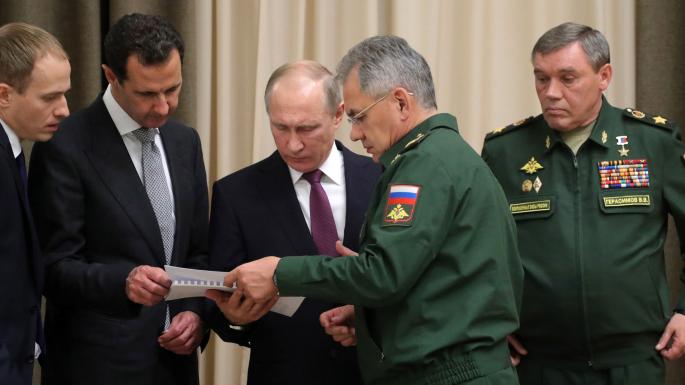 Earlier this week, presidents Bashar al-Assad and Vladimir Putin came together again in Sochi, hours after the Syrian cities and towns were declared free of the Islamic State (ISIS), and the defeat of the group in its last stronghold of Albu Kamal.

The event highlighted the victory of the Syrian-Iranian-Russian alliance on air and land and the elimination of ISIS, and the scandal of the American-led coalition of 60 countries, whose real aim has not been its stated mission of fighting ISIS, but to support the terrorist group and to help it flee and escape. So the meeting was a meeting of victors, allies and friends, and this is what appeared clear in the photos of reception and embrace between the two historic leaders.

President Assad’s visit to Sochi inaugurates a new phase, the phase after ISIS and after the war on terror, which has not ended — and will not end — until the elimination of the last terrorist in Syria. This has become very close and just around the corner, as a result of the close cooperation between Syria’s allies and the Syrian army, which has recovered its full military capacities with the testimony of the Russian military leadership.

It is preparation for the phase of Syrian-Syrian dialogue which President Assad has spoken of for years, based on clear principles, most importantly of which is preventing the intervention of countries in the internal affairs of Syria, and opening a horizon before Syrians to decide their future and destiny, and to preserve Syrian territorial integrity — in short, a phase of national dialogue which could start at the beginning of next month in Sochi itself, and then move after that to Damascus, and to establish the phase after the war and Syria’s reconstruction, politically, economically and socially.

If the Moscow summit, which brought together Presidents Assad and Putin two years ago, laid the foundations of the war on terrorism, then the Sochi summit has laid the foundations for the phase after the war on terrorism. It was an occasion to announce the victory of this righteous coalition through thanking the Russian friend for his dedication, efforts and sacrifices — not just in the war, but on the international stage, whereby Moscow was, and still is, on the lookout for all attempts by the West to intervene in Syrian affairs through the United Nations Security Council and the international organizations under its authority.

The meetings of the summit between the two allies and friends was no ordinary occurrence, and would not have occurred except for the coordination of major events to come, which will this time be for a political solution, regionally and internationally, and a national dialogue. In order to make these efforts successful President Putin, who is expected to receive the Iranian and Turkish presidents on Wednesday, had to hear directly from President Assad what was acceptable and what was rejected by Damascus in the context of the political settlement and coming dialogue — and not just between Syrians alone, but also between Russia and all countries of the world, which Moscow has begun to mediate in order to end the Syrian crisis and stop the flow of global terrorism.

Since the solution in Syria is impossible without the role of the United Nations, the Sochi summit must address the desired role for the U.N. organization in the Geneva and Astana tracks, and the possibility of supporting the international track with a national dialogue bringing together the largest spectrum of Syrians around a single table through which to decide their future and destiny, thereby easing the Geneva stalemate and pushing it forward in preparation for an announcement around an international solution to the crisis, as most Syrians desire.

President Assad once again affirmed Damascus’ openness to all countries and initiatives which contribute to persevering Syrian blood, stressing that every solution must be based on Syrian decisions and Syrian sovereignty. This is the translation of the victories and sacrifices of the Syrian army and its allies.

Syrian decisions is what must determine the Geneva track and its results, and not just the desires and hopes of the Gulf states or their henchmen, who began to fall one after the other after the victories of the Syrian alliance and the steadfastness of the Syrians and their rallying around their leaders, their sovereignty and their independence, which put an end to the delusions and dreams of those who funded them.