Instead of using the opportunity to address U.S. goals for peace, Trump's speech was used to threaten and frighten those who are most vulnerable, Wael Sawah writes 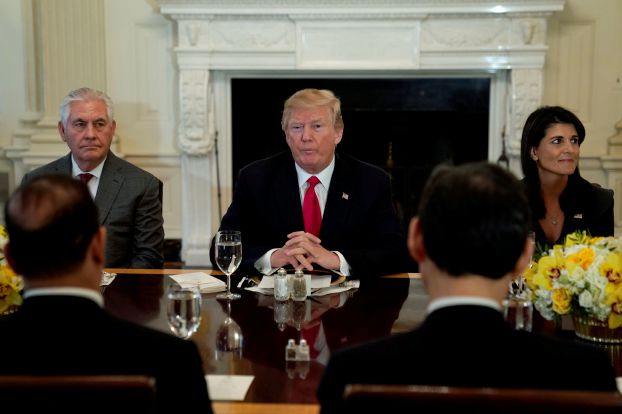 Ji Seong Ho, an opponent of the dictatorial North Korean regime of Kim Jong Un, has worked from South Korea for years to alert the world to the human rights abuses in the North and to defend the rights of persons with disabilities. But before reaching South Korea, Ji lost one of his legs under the wheels of a train which passed over him while he was stealing some coal to sell in exchange for food. Doctors performed an amputation without anesthetics and years later, when he crossed the border into China in search of medicine and then returned to his country, he was arrested and tortured severely because he had tarnished the reputation of North Korea with his disability.

Ji’s mother, sister and aunt all fled from the oppression of the Kim family and its sadism. His father was not able, and was killed by the regime despite being a member of the ruling party.

It is a tragedy indeed. U.S. President Donald Trump made use of it during his State of the Union address on Tuesday when he invited Ji to attend the speech and praised him and his struggle, and turned him into a symbol of resistance against the dictatorship of Kim’s odious regime. Every word Trump said was correct. However, half the truth is often not enough. Kim Jong Un is not the only dictator in the world.

In his speech, Trump did not once mention the murderous and destructive regime in Damascus. He made no reference, even distantly, to the tyrant Bashar al-Assad. And he did not mention the tragedy of the Syrians who are dying daily at the hands of Assad and his allies. Put simply, Trump abridged the tragedy of Syria to the Islamic State (ISIS) and portrayed the end of the caliphate state in Syria as the end of the Syrian crisis and a personal victory for himself.

President Trump could have invited the Syrian Dr. Hasan al-Hariri, whose seven children were killed in August 2014 when his house east of Daraa was struck by barrel bombs and homing missiles. His eighth child, Mansour, who was three months old at the time, survived the bombardment. But Trump could not, because the same man was killed when a warplane struck the city of Daraa last March.

He could have invited Abdel Hameed al-Youssef, who buried with his own hands his wife, children, siblings and their spouses after they were killed in the chemical attack Assad’s planes carried out on the town of Khan al-Sheikhoun last year.

He could have invited one of those Syrians rescued from the trips in primitive boats toward safety and security in Europe, or one of those refugees received by his northern neighbor Justin Trudeau or even his predecessor in the White House, Barack Obama. Syrians have a very long list of crimes against humanity carried out by Assad’s forces, Russian President Vladimir Putin and Iranian Supreme Leader Ali Khamenei if he had cared to ask.

This is not to downplay the disaster through which North Koreans are living under one of the most oppressive regimes in history. But in the American president’s annual address, one expects to hear a survey of the American administration’s role in foreign and domestic policy in a balanced and positive manner.

What President Trump offered in his speech was the complete opposite. He did not present his country’s role in Libya, Yemen and Syria, and touched on, without going into detail, his position on the nuclear deal with Iran and its expansionist role in the region. He avoided entirely going into the Russian question and the investigation being conducted by special prosecutor Robert Mueller regarding the possible collusion between his election campaign in 2016 and Moscow, while also avoiding the issue of climate change and global warming, which today is the biggest danger to the world as a whole.

Instead, the president used language to threaten and frighten, as with the issue of immigration. Trump strongly opposed any form of illegal immigration as well as some forms of legal immigration. Today he wants to forbid Americans from family reunification and inviting their direct relatives, in what is known as “chain migration.” In order to scare Americans, he simply equated immigrants and criminals, as every immigrant to him is a potential criminal coming to America to join the MS-13 gang and steal, kill and smuggle drugs.

President Trump’s first State of the Union address was poorly directed theater. The man tried to behave “presidential,” and seemed to swell cartoonishly every time the Republicans interrupted him (after practically every sentence) with loud applause and standing ovations. We wanted to believe that he actually wanted to unite divided Americans in a way perhaps not seen since the Civil War.

However, in order to believe President Trump, we would need to forget all of his racist positions and rhetoric sympathetic to fascists and extremist nationalists, and hostility to black people, Mexicans, people of color, Muslims and women. We would need to forget his racist speech around the events in the city of Charlottesville, when he placed blame on the fascists and their opposition on the same level, as well as his statements weeks ago about “shithole” countries, by which he meant African countries and some Asian and Latin American states. We would need to forget his diligent efforts to deprive 20 million Americans of health care and his constant hostility toward the environment. However, this is no easy task, especially given that Trump himself reminds of these nearly every day.