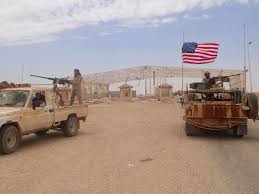 Russian Foreign Minister Sergei Lavrov highlighted the "incomprehensible" role of US forces on the south eastern border of Syria, particularly in the al-Tanf area, where America has established a military base without justification and without legitimacy. The United States established the base in al-Tanf and then followed it by establishing the al-Rukban camp to harbor terrorists and to open the fields for training, organization, and arming under the direct patronage and protection of America.

The Syrian understanding of the American presence in the country in general and in Al-Tanf in particular was expressed in a formal and categorical manner. Officials, academics, and analysts reiterated this positon: this presence is an occupation that violates Syrian sovereignty and violates general international law. It is also a mask or tool to protect terrorists and encourage them to continue criminal acts against Syria and its people. Syria has never agreed to or trust any action that the United States undertakes on Syrian soil. America is in fact the leader of the aggression against Syria and it is responsible for all the crimes committed by terrorists against Syria.

Following the cleansing and liberation of the Damascus countryside, northern Homs and southern Hama, the attention is now on the four border sectors in order to complete the liberation. The northeast and southeast regions are both in the spotlight. The U.S. has taken the base in al-Tanf after it failed in its strategy to take the entire country and control its decisions and fate. However, Syria, which understand the U.S. goals in Syria as well as its limitations, recognizes its own capabilities and the capabilities of its people and its allies in confronting the issue, and recognizes that it will not accept the occupation of its territory, especially after it successfully dealt with the conspiracy of aggression seven years ago. No one in Syria or its allies will be silent about this occupation or the confiscation of its decision making powers.