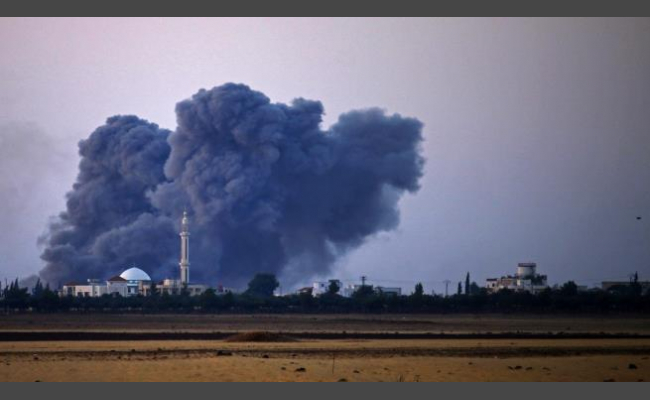 The first call came from Houran, where Syrians had been living on the verge of fear within the Assad’s kingdom of silence. On that day in March 2011, a crowd of children emerged from the belly of the sectarian beast and Daraa became the voice and the echo for all of Syria — and the start of the bloody Syrian Spring. It has a special place for Syrians who gambled on the regime’s downfall, and the southern front retained major military significance. However since 2015 it has been restricted after direct Russian intervention, and has been practically isolated from other fronts across Syria.

During a period of quiet, the belief prevailed that Daraa would enjoy special treatment because of the sensitivity of the position and its military significance. For about a year, a Russian-American-Jordanian deal held without violations, until Russia finally withdrew from it.

The Russians and Iranians have for two weeks applied pressure through military and political means to change the equation and to bring down Daraa, the cradle of the revolution. As usual, warplanes gave the signal for a full-scale assault on Houran. As was the case in Aleppo and Ghouta, the Russians led; killing and negotiating in the name of the regime and Iran. This time they are playing with complete freedom, after they received authorization from the United States and the agreement of Israel, Saudi Arabia and Jordan, and a lack of any international or regional cover for Daraa — including on humanitarian issues.

Daraa stands alone, against massive firepower, which the Russians have used previously in Aleppo and Ghouta. Despite what it has confronted for nearly two weeks, all estimates say that it is not possible to defeat the Iranian-Russian force. If we take stock from Aleppo and Ghouta, the odds are not in the favor of the fighters confronting Russia and Iran together.

At a time when Russia is undertaking negotiations with the Free Syrian Army for surrender, the Hemeimeem base has entered into a psychological war with the people of Daraa. Every day it devises a story to cover up war crimes against civilians and to hide the regime’s heavy losses. Among the most successful stories the Russians have played since intervening directly to save Assad are those that speak of the threat of the Nusra Front. This organization can be said to have a presence in every part of Syria except Daraa, where it was expelled from Houran a long time ago. The majority of the southern front is under FSA control.

A surrender by Houran has been the clear future since the start of the battle. However, the field commanders have decided to enter into battle, and there are those who say that the populations in Daraa pressured the FSA to fight, and rejected any settlement that favors of the regime and Iran.

The Daraa battle confirms that the de-escalation zone in Houran was not set up for the security of the area’s people, but rather for Israel’s security. All the negotiations surrounding the south were done according to Israel’s standards, and all the arrangements which were made were done with Israel’s understanding, by way of Russia. This was shown by the tripartite Russian-American-Jordanian understanding before the battle, which also confirmed Russia’ deceit with regards to the de-escalation zone, and showed that the operation as a whole served as a way of calming and fragmenting the war in Syria, by dividing the fronts and separating them from one another in order to bite them off one after another.

If the Russian plan to take control of Daraa succeeds, then all de-escalation zones will have fallen, and Idleb’s turn will be next. What is certain is that what is happening in Daraa cannot be separated from the “deal of the century” — and this is what the Israeli newspaper Haaretz confirmed during the recent visit by American presidential adviser Jared Kushner, as well as the Israeli statements about Bashar al-Assad being kept in place in exchange for Iran’s agreement to the deal.