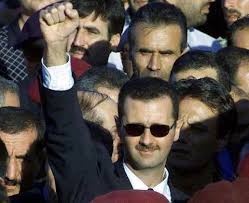 The Assad regime and its allies and supporters like to say that the Assad regime has won over Syrians and that its army is on the way to regaining control over all Syrian territory that fell outside its authority in recent years after Syrians declared their revolt against the dictatorial and murderous regime in an attempt to gain freedom, justice and equality.

If the regime was the first party to spread the idea of its “victory”, then the Russians, Iranians and their militias were the second on the list. Over the years, they were the force backing and supporting it both domestically and abroad, and they have announced many times that their intervention alongside the Assad regime protected it from falling to Syrians. The Russians played a prominent role in protecting the regime at the UN Security Council by declaring a veto against any resolutions that targeted the regime’s policies and crimes, paralyzing the international community from adopting any decisive resolutions. Then came their military intervention at the end of 2015, which overturned the balance of military and political forces in the conflict and placed the regime (along with other factors) on track to regain areas that had fallen out of their control. Iran and its militias backed them as well, and strengthened the regime on the ground, in addition to broad economic and political support for a regime that had lost most of its capacities.

Naturally, the Russians and Iranians did not give enormous support and make efforts to achieve “Assad’s victory” outside the scope of their interests — and thereby they did not only become the decision-makers in Syria, but also obtained direct gains, including military bases and establishing proxies and an allied social structure. They obtained economic benefits and investment contracts. Their militias also participated in looting Syria’s individual and collective resources after their hands were freed, with everything mortgaged to the continuation of the regime and its president in power. The declaration of “victory” means preserving what they have gained and the possibility of these gains developing in the future, especially in the coming reconstruction stage.

However, the expression of “Assad’s victory,” or promoting it, is not limited to those allied with him. There are two groups headed in the same direction: First the regimes and countries for whom the regime’s survival meets their interests, as in the example of Israel, which has tested in recent decades the regime’s credibility in preserving Israel’s security by adhering to the 1974 forces separation agreement in the Golan. The regime renewed the basis of this relationship by not responding to the attacks on Syrian targets by Israel and complying with its terms in going to battle to regain the south from the armed opposition.

The second group of those on the path of saying, “Assad’s victory” is comprised of political organizations and groups and Arab and foreign figures who are still captive to their ideological and political visions from a variety of angles. Ideological and political blindness has prevented them from seeing the facts of the Syrian conflict and the crimes of the regime and its allies and the impotent regional positions — they still see the regime as progressive, anti-imperial, anti-Israel and other beliefs whose falsehood has been blatantly exposed.

Perhaps it is useful to conclude with a line from the Syrian constitution which was amended by the Assad regime in 2012 to illustrate the contradiction between its contents and what has become the current situation in Syria that puts the lie to every one of its paragraphs. It says that Syria is a “democratic state with full sovereignty, that cannot be divided nor have any part of its land waived and is part of the Arab world.” The regime is “in a republican government. Governance is by the people, no individual or group has the right to claim it, and is based on the principle of governance for people by people.” as well as that the political system is based on the “principle of political pluralism” and “exercises power democratically through voting” and that “Freedom is a sacred right and the state shall guarantee the personal freedom of its people and safeguards their security and dignity,” and then, “citizens have the right to gather and demonstrate peacefully and to strike within the framework of the constitution’s principles”!