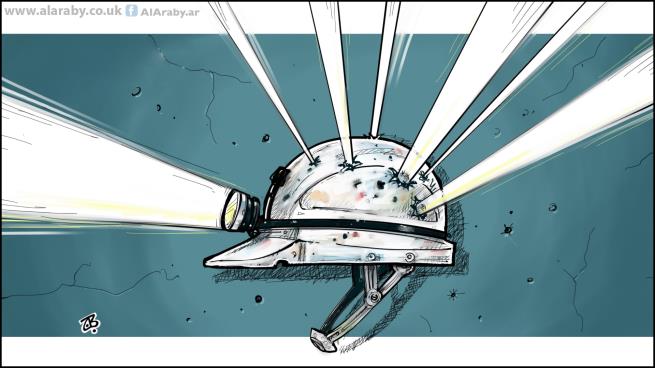 Authorities of the Russian mandate and the Syrian regime bear the legal and moral responsibility for the departure of hundreds of White Helmet volunteers with their families from southern Syria to abroad. Whether applying the laws of war or peace, the lives of these humanitarian volunteers should be respected and preserved. They do not carry weapons, and the whole world has agreed on their role in saving tens of thousands of lives across Syria, and they have gained praise from international institutions.

There are still conflicting reports about the conditions surrounding the expulsion of 800 volunteers from Daraa and Quneitra to Jordan, along with their families under United Nations cover following a decision by the United States, Britain and Canada. However, voices have risen to denounce them, and have described them as collaborators with Israel. Escalating matters further, Israel has exploited the operation of securing their passage toward Jordan to whitewash their own image, and have benefited greatly from the service provided to them by the Syrian regime.

This week, Israel carried out a number of crimes, which it wanted to pass without media attention. The first crime was the Knesset approving  the Jewish Nation-State Law, according to which, Israel became the state of the Jewish people, and gave itself the right to write off a quarter of the population of the Arab state who are 1948 Palestinians, and to abrogate the Palestinian right of return. The second was continuing the expulsion of residents from the Al-Khan Al-Ahmar area near Jerusalem. The third was to impose a siege on Gaza by closing the Kafr Abou Salem crossing and preventing the entry of goods into the sector while continuing daily bombardments.

Rather than the media, public opinion and the United Nations focusing on the thuggery of Israel and its rulers, who have reached a dangerous level of racism and violence, the first concern has been with the expulsion of the White Helmets and appreciation for Israel and “its intervention in areas of military operations to save the lives of Syrian families.”

Saving the lives of 800 Syrian volunteers is an act that deserves appreciation. However it is lacking, because the United States would have been able to help them stay in their country by pressuring the authorities of the Russian mandate. The great powers could have stopped the Russian expansion in Syria, and prevented the displacement of people to Idleb, which has turned into Nusra Front’s citadel.

The resignation of the international community from its responsibilities in Syria and its abandonment of the Syrians serves to throw them to the Islamic State (ISIS), Nusra Front and Bashar al-Assad, without any other option. At the same time the myth of Israel’s security remains the priority for all parties.

It is no accident that a few months ago there was movement among influential circles in the American administration to adjoin the Golan Heights permanently to Israel, with a conference held for this purpose in American Congress last week, with an initiative from the Head of the Israeli Jerusalem Center for Public Affairs, Dore Gold, who is close to Prime Minister Benjamin Netanyahu, and a congress member from the Republican Party Ron DeSantis. Participants called on the American administration to “recognize the sovereignty of Israel over the Golan Heights.” This conference came within the framework of activities carried out by the Israel lobby in the Untied States, and stressed “the need to bolster Israel’s security.” Dore Gold said in his speech that the presence of an administration in Washington that understands Israel’s security needs to send a message to Arabs and to the world that the United States stands by Israel and to increase its regional position. DeSantis said that after what has happened in Syria over the past seven years “it is crazy to imagine that the Golan Heights will return to President Bashar al-Assad’s control.”

At this time, the news is occupied by the killing of peaceful activists in Assad’s prisons. The timing is not without significance — especially since all names the regime has announced have been young men of peaceful coordination councils known as “activists with the roses,” such as Yahya Shurbaji and his brother Maan, whose family received news of their deaths under torture on Monday.