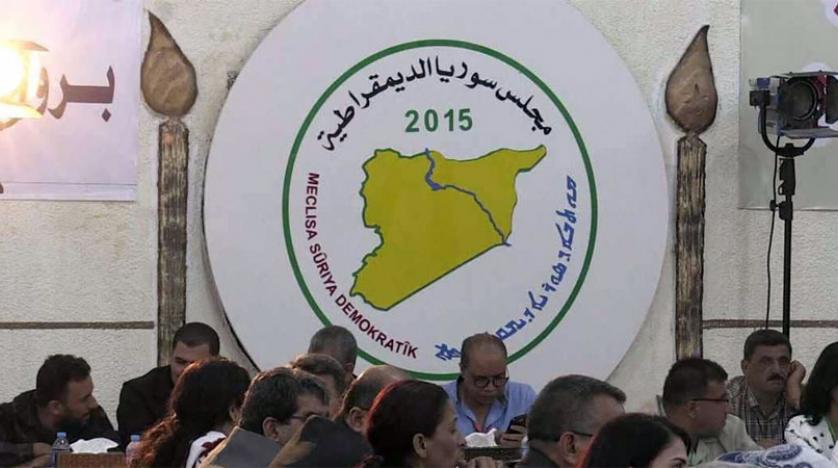 A visit by the Kurdish-Arab Syrian Democratic Council (SDC) to Damascus did not only reveal the depth of the gap between the two sides, but also the mistaken impressions both have about their new rival, who had been an ally in previous years. Also, it showed the inaccuracy of both of their bets on their international allies — Washington for the Kurds, and Moscow for Damascus.

The SDC delegation came to Damascus armed with the belief that the Washington-led International Coalition against the Islamic State (ISIS) was remaining northeast of the Euphrates River. Kurdish military and political leaders believe that US President Donald Trump will not withdraw his forces from eastern Syria for two reasons. Firstly, to curb Iranian influence and to cut off the Tehran-Baghdad-Damascus-Beirut route; and secondly, to defeat ISIS and ensure it does not reappear; that is, for Trump not to repeat the mistake of his predecessor Barack Obama when he pulled out of Iraq.

For that reason, the SDC delegation raised the roof of its expectations. Beginning first with the return of services in terms of electricity, health, water and education to the Syrian Democratic Forces (SDF) held areas, which comprise a third of Syria’s territory, with about 185,000 square kilometers, in addition to reaching a direct deal that serves their “joint interests” with regard to using the oil fields which account of 90 percent of Syria’s production, and the gas which accounts for about half of national production.

For the visiting delegation, success in trust-building measures would lead to the transition to a second stage which will include the Syrian state taking control over the border crossings with Iraq and Turkey and deploying security agencies, in addition to discussing a deal for the conscription of the eastern area’s young men, and the future relationship of the 75,000 fighters in the SDF with the Syrian Army.

The third stage would revolve around the nature of governance. The delegation believes that it is able to impose a Self-Administration formula, especially after the formation of a council to coordinate between the administrations in the three provinces of Hassakeh, Deir ez-Zor and Raqqa and the Kurdish majority areas.

In contrast, it appears that Damascus, through the few words of the delegation of the National Security Council, headed by General Ali Mamlouk, with visitors from eastern Syria, is not in a hurry. It was clear, according to the reports, that Damascus had discussed the “red lines” which were: control over all the border crossings, including those that are under SDF control, with Iraq and Turkey; raising the official flag over all border crossings and public institutions; and not accepting any “separatist measure.”

Therefore, it seems that any step to restore services needs to be connected to centralized security. Damascus is not in a hurry to carry out direct negotiations to use the oil and gas fields, and prefers to deal through intermediaries, who have become warlords gathering hundreds of millions of dollars by transporting oil tanks from the Al-Ramailan and Omar fields to Homs refineries.

The security delegation, from which politicians and government figures were absent, was not ready to discuss decentralization or self-administration. Indeed, there was a conviction that Law No. 107, which discusses local administrations under the Local Administration Ministry, was sufficient enough to address Kurdish concerns, in addition to some concessions related to Kurdish rights to language, celebrations and services.

It is clear that Damascus is basing its hardline position on three issues. The first is the recent military gains near Damascus and Homs and in southern Syria; secondly the Russian air support and Iranian land support, and finally, a bet that the Americans will leave Syria and that time is on the side of Damascus. There is also a fourth hidden bet, which is its ability to manipulate the eastern region by penetrating previous alliances with Arab tribes and Kurdish organizations. For that reason, Damascus had not made an official announcement about the meetings, and has been content with a few words quoted through a “high-level source” which have included a denial that the issue of decentralization was discussed.

Faced with this gap, the only achievement of the meetings was for Damascus to lift the ban on technicians and experts going to repair the electricity turbines in the Al-Tabqa dam on the Euphrates river, and the sending of employees for health facilities. There has been extremely slow progress in the formation of a joint council to discuss future cooperation, as they play a game to buy time.

One new Kurdish proposal that hopes to create a breakthrough, is cooperation between the two sides to carry out an attack on Afrin and Idleb. That is, turn back the clock and recall the previous cooperation between Damascus and the Kurdistan Workers’ Party led by Abdullah Ocalan against Turkey.

The problem with this bet is the mistaken impression both have about its ally. Russia did not allow Damascus to offer support to the Kurdish People’s Protection Units (YPG) in Afrin at the start of the year, but abandoned the YPG in favor of Turkey. Russia also has not allowed government forces to carry out a full operation against the opposition and Islamist groups in Idleb. In addition, the Americans are allies of the SDF and have made a deal with Turkey to settle the Manbij issue, which could come at the expense of the YPG.

History could repeat itself. The Russians could let down Damascus in Idleb, and the YPG in Afrin, while the American let down the SDF east of the Euphrates, as they let down the Russians with Operation Euphrates Shield and Olive Branch.