The regime and Russia are continuing their advance on Idleb, but heavy resistance has slowed their presence and led to many losses reports Zaman Al Wasl. 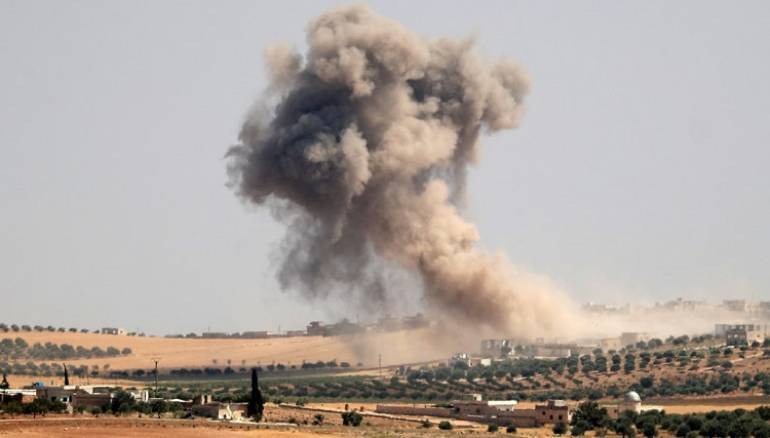 The airstrikes struck the towns of Sarmin and Bennish. Two displaced children, originally from eastern Ghouta, were killed.

On Sunday, barrel bombs killed a child and wounded seven other people in Maarshourin town.

In the turn, the armed opposition thwarted a new incursion attempt by regime forces and pro-Iran militias in the eastern countryside, following a week of heavy losses in weapons and military personnel.

Pro-regime militias are seeking to advance in the eastern countryside but rebels have been able to thwart several attacks, leaving dozens killed and wounded.

The regime army has been pressing to secure strategic territory located between Idleb and Lattakia province, cutting the main supply route and weakening the unprecedented resistance by rebels.

On Wednesday, rebels hit an outpost for the regime’s elite Tiger Force and Iranian militias near the town of al-Mshairfah, east of Idleb city, killing 22 troops.

The Tiger Force are led by Brig. Gen. Suheil al-Hassan, a Russian-backed Syrian officer who has taken credit for some of the regime’s biggest victories in the almost nine-year conflict.

The Idleb region, home to around 3 million people, including many displaced by Syria’s eight-year civil war, is controlled by the country’s former al-Qaeda affiliate.

The region is one of the last holdouts of opposition to the forces of Bashar al-Assad.

A ceasefire announced by Russia in late August has reduced violence in the area.

The Syrian Observatory for Human Rights estimates that nearly 1,000 civilians were killed in that period, and the UN says that more than 400,000 people were displaced.

Bashar al-Assad, who now controls around 60 percent of the country, has vowed to reclaim the rest, including Idleb and small pockets in Lattakia.

The three countries also said they rejected attempts to create, “new realities on the ground, including illegitimate self-rule initiatives” and that they were opposed to the illegal seizure and transfer of Syrian oil revenues.

Commenting on the work of the Syrian Constitutional Committee, the three nations said it should be governed by a sense of “compromise and constructive engagement” without foreign interference and externally imposed timelines.