Amjad Bakir was well known as a photographer, who frequently took pictures of opposition fighting in the northern and western countrysides reports Enab Baladi. 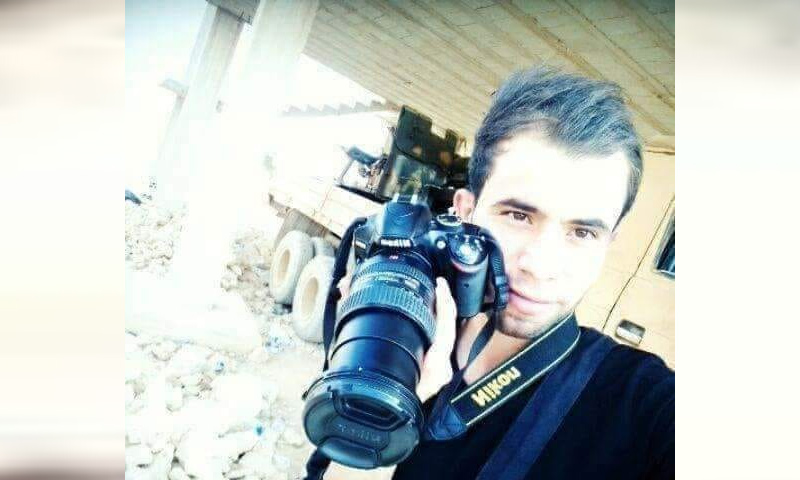 A media activist from Saraqeb in the Idleb countryside, Amjad Bakir, was killed while covering the ongoing fighting in the northern Hama countryside.

On Jun. 18, 2019, Enab Baladi’s correspondent in Idleb reported that the media activist was killed during an aerial bombardment that hit a car that he was returning in from the northern Hama countryside fronts.

The correspondent said that Bakir was a field photographer and had covered a number of battles by opposition groups in the northern and western countrysides, adding that he was from the town of Saraqeb in the eastern Idleb countryside and was 23 years-old.

Rebel groups today launched an attack against Assad’s forces on the northern Hama countryside front, towards the town of al-Jalameh and Kafr Hood.

Coinciding with the military operation, Russian warplanes and Syrian regime warplanes continued their bombardment of northern Syria, especially the southern Idleb countryside and the northern and western Hama countrysides.

Activists from Idleb province mourned their colleague Amjad Bakir, and put out a video recording of him covering the ongoing fighting on the northern Hama fronts.

Syrian activists and journalists have faced many violations since the start of the peaceful movement in Syria in 2011.

The Syrian Center for Press Freedoms, part of the Syrian Journalists Association, has documented the deaths of 435 journalists and media figures at the hands of the Syrian regime and its ally Russia from March 2011 to August 2018.

Citizen journalists have played an important role in transmitting and publishing news over the years of the war in Syria, which is in its ninth year.

But the crimes committed against journalists have escalated gradually as those who carry them out evade punishment, according to the Syrian Network for Human Rights.

A report published by the Response Coordinators in Northern Syria yesterday said that 40 civilians had been killed last week as a result of the military campaign by Assad’s forces backed by the Russian Air Force on areas of northern Syria, including 11 children, bringing the total number of civilian victims during the military campaign to 769, including 221 children, as well as dozens of wounded.

The team also documented the displacement of 84,904 families (551,877 people) since the military campaign by Assad’s forces and Russia began in February on the Idleb and Hama countrysides.