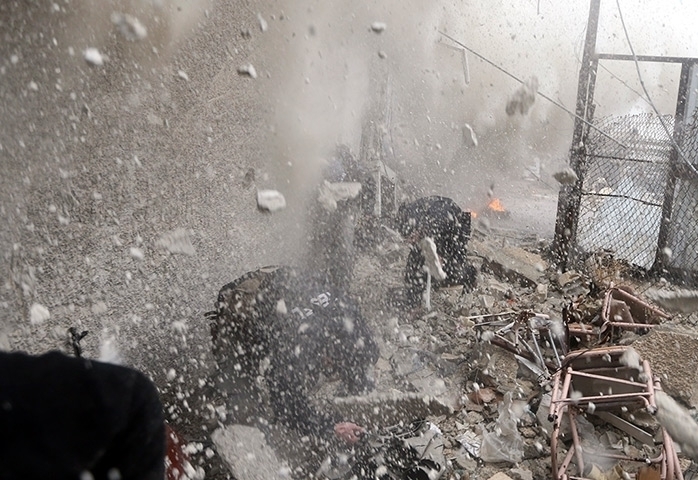 Regime helicopters shelled the town of Handarat and al-Kastello region in the northern countryside of Aleppo with explosive barrels containing the poisonous chlorine gas, wounding several people. The injured were transported to al-Bayan hospital in the city of Aleppo to receive treatment.

Residents of the town said that regime warplanes bombed an area in the vicinity of Handarat with vacuum missiles carrying an unknown yellow material. They stressed that it did not cause serious injuries because the missiles fell in empty places.

Abu Ubada, a media activist from Masaken Hanano, said al-Bayan hospital received a number of patients with minor injuries, who were treated in the hospital and discharged because their medical situation was stable.

Some of the poisoned patients suffering from contractions in chest muscles arrived in several hospitals in Aleppo and its countryside, after the intensive raids of regime's warplanes and helicopters. The field activists in the city said this was the regime's reaction to its losses in the northern countryside and the liberation of the town of Handarat, as well as to the death of many Shiite militias. The activists warned of the use of missiles that carry chlorine in populated places, "which might cause a disaster".

Regime forces recently bombed several areas in the northern countryside of Aleppo with chlorine, following the defeat of its militias in Ratyan and Hardatnin.