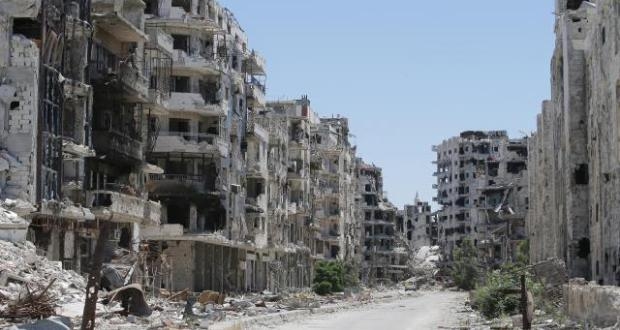 While Russia expands its influence from the Syrian coast to Shayrat Airport in Homs, Assad forces reached a truce with opposition factions in the neighborhood of Al-Waar. The truce was finalized in the presence of a UN delegation including representatives of the UN Humanitarian Coordinator in Syria, Yacoub al-Hilou, and special envoy Staffan de Mistura’s office in Damascus.

Al-Waar is considered the final stronghold of the Syrian opposition in Homs whose strategic position on the road between northern and southern Syria gives it great strategic significance in the implementation of Assad’s “Plan B": the formation of an Alawite State on the Syrian coast and the capital, Damascus. Political circles believe the plan might also be adopted by Moscow in a last-ditch effort restore regime control over all Syrian governorates.

The agreement was reached during a meeting with representatives of all factions fighting in Al-Waar, as well as others from local civil society groups and UN representatives in Damascus.

According to sources in the Assad regime, "a final agreement was reached, and the opposition forces will leave their last strongholds in Homs in stages," said Homs governor, Talal al-Barazi, adding: "we will begin the implementation of the agreement with 200 to 300 fighters in the first phase starting from next Saturday."

In contrast, opposition sources said: "the truce is not due to military weakness, but to a great aid deficit which hit the neighborhood, turning it into a humanitarian disaster. Despite its resistance for two years, it has exhausted all its reserves on every level."

Assad's regime has been been pushing for a ceasefire with a number of opposition forces, recently reaching an agreement with rebels in the city of Qudsaya.

It is worth mentioning that the Assad regime did not facilitate the movement of opposition fighters to other areas in the north, as the regime fears the fighters may form a unified military force capable of organizing a major attack on the northern fronts, threatening regime strongholds in coastal and central Syria. But the regime’s strategy quickly changed after recent talks of a political solution, as Assad hopes to achieve quick victories and tighten control over the "useful” parts of Syria for a stronger position in any negotiations.