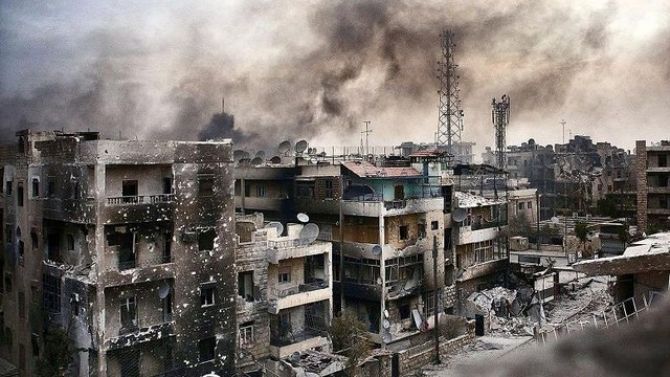 The Arab League and the Organization of Islamic Cooperation on Sunday “strongly” condemned the killing of civilians in Aleppo and called for the international community to intervene directly to stop what was occurring in the city.

The general secretary of the Arab League, Ahmed Aboul Gheit, said: “We strongly condemn the killing which civilians have been subjected to in the Syrian city of Aleppo for days. As a result of the brutal air bombardment and the subsequent militant operations in eastern Aleppo, cementing the collapse of the ceasefire which had previously been reached.”

Aboul Gheit added that: “This dangerous escalation reflects the continuation of the erroneous conviction among some parties (which he did not name) that it can impose a military solution on the ground, thereby avoiding the need for a political agreement.”

He continued that: “What media reports have indicated about the use of banned weapons against civilian residents is a regrettable and highly dangerous development. It must be stopped immediately if confirmed.”

On Saturday, Ban Ki-moon, the Secretary-General of the United Nations, said in a statement: “Since the announcement two days ago by the Syrian Army of an offensive to capture eastern Aleppo, there have been repeated reports of air strikes involving the use of incendiary weapons and advanced munitions such as bunker buster bombs.”

Aboul Ghent in his statement called upon the Security Council to carry out its moral and legal responsibilities and oblige all the parties connected to the issue to reach an immediate and real ceasefire allowing for the delivery of aid and the rescue of thousands of innocent civilians.

In the same context, the Secretary-General of the Organization of Islamic Cooperation, Iyad bin Amin Madani, said: “We strongly condemn the ongoing bombardment of civilians in Aleppo and the destruction of humanitarian aid convoys.”

Last Monday, a UN aid convoy was hit by an air strike in Syria. Russia and America traded accusations about who was responsible for the strike. Opposition sources said that the bombardment also hit a Syrian Red Crescent center in the town of Awram al-Kubra in the western Aleppo countryside during the unloading of trucks carrying humanitarian aid.

The sources said that the bombardment was combined, beginning with helicopter bombardment, by the regime and then a Russian air strike, which killed 12 people, including a Red Crescent official, and wounded 18 others. The Russian and Assad regime authorities have continued to deny the issue, accusing Washington of devising it.

Madani called on the international community, and especially those who have vowed to imposed a ceasefire in Syria and establish a humanitarian truce, to intervene quickly to stop the killing and massacres which were being carried out in residential areas.

Madani stressed the need for the United Nations to move to fulfill its duties to stop the flagrant violations of international humanitarian law which were being carried out in the city of Aleppo.

The Turkish Foreign Ministry and the European Union and the United Nations have condemned the air attacks which the regime and its backers have stepped up recently on civilians in Aleppo city and its surroundings in the country’s north.

Regime forces and Russian air forces have carried out a continuous heavy air campaign against the districts of Aleppo under the control of the moderate Syrian opposition and populated with civilians, killing 323 civilians and wounding 1,334 others. This has occurred since the end of the truce on September 19 (signed by Washington and Moscow) after the fragile ceasefire lasted no more than seven days.