A panel called "The Struggle for the State in Syria" discussed what the future held for Syria and what problems it might face writes Al-Araby Al-Jadeed. 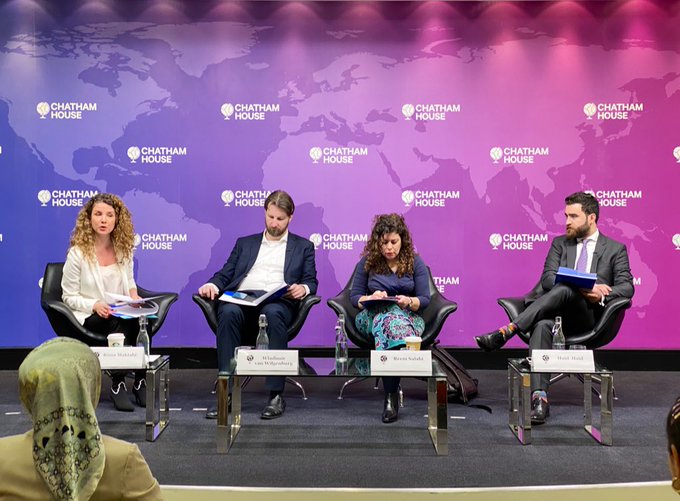 Academics, journalists, activists and NGO workers met at Chatham House in London this week to discuss the future of Syria nine years after the start of the revolution entitled “The Struggle for the State in Syria”.

Among the issues examined by the four panels of the Syria Conference 2020 was accountability for war crimes, refugees, governance in regime areas, and the proliferation of non-state actors.

Unlike most Chatham House events, The Struggle for State in Syria was on record, and below are the highlights from the panel discussion.

After nine years of war, the landscape of Syria has been altered beyond recognition with internal actors carving out territories, while outside powers have jostled over influence, land, and resources.

The complex nature of the conflict has seen numerous distinct zones being formed in Syria, including areas controlled by the Syrian regime but under Russian or Iranian influence. Even in Idlib, Hayat Tahrir Al-Sham’s authority varies form town-to-town.

In parts of northern Syria under Turkish-military control, there have been numerous factors deciding the level of interference by Ankara. The Kurdish-majority city of Afrin has seen the most direct form of rule from Ankara, while Syrian opposition councils have been able to run their own affairs in other towns, Reem Salah said.

“Every [Syrian] town is its own universe. They are all connected to some municipality in Turkey, so for example Jarabalus and Al-Bab are connected to Kilis [in Turkey],” said Salahi, referring to the areas under Turkish-Syrian rebel control.

Territories run by the Syrian Democratic Forces have also seen the level of direct rule vary from one area to another, depending on the ethnic makeup of the town, said Wladimir van Wilgenburg.

“Always they have been a little bit stricter on Kurdish areas because they have ultimately assumed that these people are their supporters,” said van Wilgenburg.

“For example, on polygamy they are stricter, but they have also implemented a military conscription system… in Kurdish areas they are more tough because they don’t want the Arab communities to rise-up against them.”

In Daraa, which was re-captured by the regime in 2018, there are zones more heavily influenced by Russia or Iran, and others that have come under the direct control of the regime.

Some towns were also given limited autonomy when agreements were made with their surrender by the rebels and Russian military police have acted as conduits between locals and the government on issues of grievances.

“I don’t think Daraa is under Russian control. Russia has influence over specific areas of Daraa, but it is not under its control,” said Haid.

With a stalled economy and currency crisis, sanctions and shortages of basic goods – and ineffective governance – there are plenty of grievances in opposition areas.

Protests have broken out in Suweidah, a majority Druze area, over the dire economic situation, while in Daraa locals have resorted to self-funding and DIY initiatives to fill the void due to the government’s ineffectiveness in providing services. Whether this strategy is suitable for the long-term and the viability of regime rule in general remains in question.

Governance in Syria has traditionally been dominated by the security apparatus and the Baath Party, Zaki Mehchy explained, but nine-years of war has altered the equilibrium of power in state institutions.

“The leaders of the Baath Party are among the network or regime, but the Baath Party as an institution is being used and abused by the regime to control people and state entities,” he said.

Ibrahim Olaibi mentioned the issue of law making during the war, where laws have been passed to cover the whole of Syria even when the majority population was living outside regime control. This, he refers to as a method of lawfare by the Syrian regime.

“Why does the regime – which has the military power – need to play this legal game and why does it need to use law as a means and method of warfare,” he said.

“It tells Syrians, I know I only control 50, 60 percent of the land, and I know that none of the laws we pass are ever going to be respected but I can still do it and I can still get away with it. That is its message of power, that I am still in control and I can play dumb and issue these laws and amnesties and still control you.”

“When talking about non-state actors, it’s hard to talk about one pattern because it’s different from one area to another…. Sometimes the non-state powers have power and leverage over the regime, and in some areas, they benefit from their presence,” said Khaloud Mansour.

Nine years of war has seen the regime’s military and intelligence services further dominate the apparatus of the state. Sam Dagher reported from Syria until 2014 and during these years witnessed the subservience of government officials – including ministers – to intelligence officials and militia leaders. “They are not shy about telling it the way it is. They were saying ‘we are the ones making the decisions and we actually tell the ministers what to do’,” Dagher said.

While Dagher interviewed one militia leader, they demonstrated this by picking up the phone and giving instructions to Syria’s oil minister.

Dagher said he was also questioned by intelligence officers (posing as officer managers) before and during interviews with leading government officials, highlighting the dominant role of the security apparatus in Syria.

Lina Khatib explained that the breakdown of government rule in regime territories has led militia and intelligence leaders to act as local chieftains.

Pervasive crony capitalism has also seen these actors use their power to benefit affiliated business leaders or themselves. “Laws have been curated to allow these transactions to take place,” said Khatib.

One example given was Law 48, which allows the private sector to share construction projects with the state, thus providing business owners affiliated with the regime opportunities to generate further profits.

“One can argue that this type of law permits rising profiteers to engage in business – in a legitimate way – to line their profits and support the state at the same time,” she added.

Nine years of bombing, gas attacks, massacres and torture – predominantly committed by regime forces – has seen half the Syrian population uprooted and more than half of those flee abroad. The ability of the regime to take back opposition territories, completely unopposed by world powers, and Bashar Al-Assad’s continued grip on power has left the question of accountability as one of the dominant issues for Syrian activists.

“It is only fitting to conclude with a session on accountability and the rule of law, simply because dignity – or its lack – has been one of the moving and mobilising forces for Syrians to take to the streets and resist in the last nine years,” said moderator Salim Salamah.

“There has been a process of normalisation in Syria, there has been propaganda that the war is over, and Russia has started talking about reconstruction, which eventually paves the way to talk about repatriation and that (regime-controlled Syria) is a safe zone,” said Sana Mustafa.

The Syrian Women’s Political Movement asked displaced women inside and outside Syria what conditions would need to be in place for them to return to their homes. They concluded that the foremost demand was political transition, which is an unlikely scenario given the behaviour of the regime.

Although the return of some wealthier Syrian exiles would be desirable for Russia and the regime, Assad also wants to keep the millions of poorer refugees out of the country.

“The regime, at the moment, is trying to cater to a very specific class of people. I think it will go out of its way to make sure those type of Syrians (poorer refugees) do not return to Syria because they are not the Assad regime’s problem anymore and I think they want to maintain this,” said Rime Allaf.

“There is reason for this vicious bombing campaign in Idlib – the hitting of schools, and hospitals, schools and markets – this is a calculated campaign, as we all know, to terrorise the population into surrender but also for them to flee because the fewer Syrians they have to worry about the less they have to do,” she added.

Jomana Qaddour, who has worked on the Syrian constitutional committee, said that the regime and its international allies will not allow the US and Europe to obtain a political win out of the opposition’s defeat, thus making political negotiations challenging without firmer action.

“To have a genuine political negotiation you absolutely have to have leverage. Having the moral high ground is not enough… frankly that is a problem we face. Our allies – the United States and Europe – are not applying the kind of leverage that would give us something to use against the regime or put on the table,” said Qaddour.

“I see little reason for them to concede what they have fought very hard to obtain.”