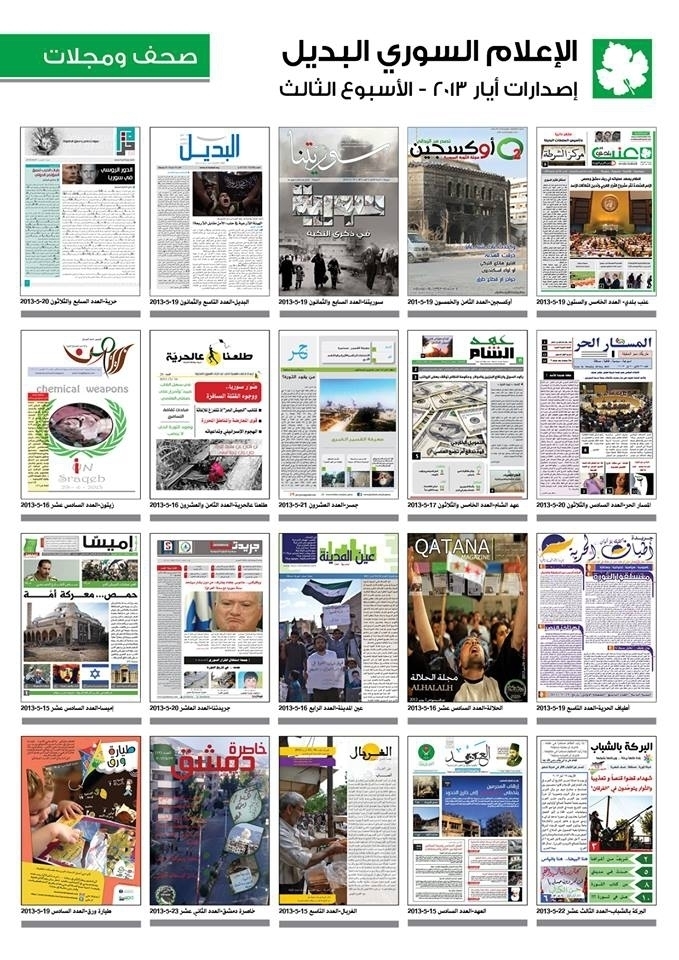 The Syrian activists are creating new methods to contribute to the media battle with the regime, and to play a role in communicating what is happening on the ground in Syria to the Syrian people and to the world. In fact, a huge part of what we know about Syria is because of a new generation of men and women who have become journalists by accident.

“The military and intelligence blockades are no more a problem,” says Ziad Awad, editor-in-chief of Ain al-Madina (The Eye of the City), a bi-weekly newspaper. “We have many ways to get around those. We can deliver the paper to most people, even to those outside the liberated areas.”

Ain al-Madina, a political, social newspaper, is only one of many others: Hinta (Wheat), Dawdaa (Noise), al-Ghirbal (The Sieve), Jasmine and Emessa are all new publications issued weekly or bi-weekly, and add up to the huge number of websites and blogs that all work to communicate the truth to the world.

Awad received brief training with an international institution that supports new alternative media to the media of Bashar al-Assad.

According to Awad, “our new media has to bear with the other and promote pluralism. It has to reflect the situation as it is.”

With the continuous power outages and poor Internet connectivity, the new newspapers and publications can be an alternative. In some areas, they are really the means of communication and getting across information about what is going on around.

The new publications do not target a foreign audience. “Our audience is the local communities that need and have the right to know the truth about this war that has destroyed men, nature and the infrastructure,” says Awad.

Huda is an alias (this kind of name is mostly used by activists as a kind of protection from security system penetration) used by one of the workers in a publication that started to distribute about 6000 copies every two weeks. She says  that ”in light of the continued escalation of the war between the Syrians, the authority and the opposition, against the backdrops of the insistence of the authorities to remain in power after nearly half a century of monopoly and the Syrian majority’s determination for change, freedom and democracy, the country has been torn into pieces, cities into security zones, and many cities and villages transformed into deserted or trapped areas that don’t receive much of the world outside their internal borders…. Thus the ideas and the articles wepublish are welcomed by the population; theyexpress them and offer intellectual meals that contribute to their survival in an atmosphere of ongoing life because we don’t want their lives to stop through the act of war…..”

Mazen, a young man involved in the revolution against the tyrannous regime,as he introduces himself, has this to say: “We began, my colleagues and I, as volunteers. Then we became keen on this profession and we were very pleased when we found an organization to fund us and help us establish a magazine. Despite our ambition to produce an electronic magazine since it reaches a wider audience inside and outside, as the proverb goes, to have a half loaf of bread is better than nothing. Here bread is my intellect, my spirit and a variety of inhabitants’ diaries on our magazine’s pages…. And we are glad that our agency provides most of the work necessities such as electronic devices, money, experts to teach us….and any other necessities.”

One of the managers of that organization says, "We are doing whatever we can in order to ensure the success of these media projects. Sometimes we sort out contributors until it is clear who wants to continue, work permanently, or doesn’t work at all. Some of our crews were arrested and others killed, but the majority work in relative safety; some got the tools and vanished….. Finally, we‘rehere today with a group of media projects that became a reality and the Syrian audience is waiting…. Thecrews have changed gradually into almost professional-level personnel that received job opportunities.

Muhammad al-Saloum, editor-in-chief of al-Gherbal magazine issued in the north of Syria, expresses that "despite the distance we have crossed in establishing and issuing a series, we know that a long path still lies ahead of us in order to establish various powerful media which can be a true alternative to the media of the regime. We are tired of the dead language and hollow speech the criminal regime used. We want a better future for our children and media is one of the most influential means in our generation to sway public opinion… Our media will have a prominent role in the future despite all the difficulties.”

Saloum adds, “We provide the administration with all the bills and we exchange ideas with colleagues in the magazine about the themes, titles, prices of publications, graphics and all the details. We also enjoy the work and we believe it is beneficial for Syrians.”

These publications have recently had a noticeable presence among the inhabitants, and its activists advertise it through social networks and web pages in order to reach as many people as possible outside Syria and within the nation as well, if the Internet is available. The articles comprise such intriguingand varied topics as: selling weapons, social experiments in various areas, married life in the time of the revolution, freedom between implementation and demands, childhood and the evils of war, the role of the youth in the building process, planting trees as a persistent necessity, intellectual theorization in the time of hunger as well as many other subjects and ideas, including criticizing the performance of some members or brigades in the Free Syrian Army. An activist commented that "everything is under the eyes of the media; we carried out a revolution to be able to express our opinion. We don’t want to move from the bad to the worse, as the proverb says."

Donor countries contribute to support these "progressive" projects, so their continuity is guaranteed. This increases youth enthusiasm and connects them to local media, which spread in most Syrian interior regions, but this is just one part of the scene and it doesn’t exceed 10 publications among tens funded by Syrians themselves.

Supporter Issam Haidar says, "I have seen some of these magazines. They don’t have much new; they express a voluntary statement and don’t carry new thinking. They support the armed groups and ignore different views. They speak about freedom and the regime didn’t allow it, but those who demand freedom should apply it to all people."

"Our media is humanity’s revolution for freedom and our media is different from the media of the regime: it is closer to the people, it is not fake or politicized in a direct way. We want these projects to be a mirror for Syrians, for new Syria, and we want them to contain everything within their pages," Haidar adds.

There are now some 50 publications in the Syrian areas that aren’t under the control of the Assad regime's censorship. They vary in publication frequency, with some printed inside Syria or in neighborhood countries, and they are as George Haddad says "a breathing lung for many Syrians".