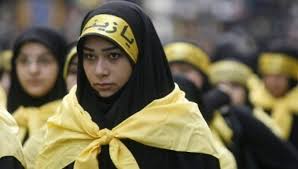 Iran and militias loyal to it have used a number of tools to spread the Shia doctrine, including exploiting the weight of the area’s tribal sheiks to spread its sectarian project, and has entrusted prestigious leadership functions of the Al-Baqar Brigade to Sheikh Nawaf al-Bashir and his children, with the aim of attracting Al-Bakara tribesmen, putting them into battle and influencing their beliefs.

The head of the Al-Sharq News Network, Firas Alawi, told Souriatna: “Iran has begun to rely on prominent local tribal notables to spread Shiism, and has opened the door to membership in the militias that it has formed, primarily the Al-Baqar Brigade.”

Alawi noted that “Iran has tried to strike the tribes’ chords, such as its choice of the name of Imam Mohamad al-Baqar to penetrate the Al-Bakara tribe, whose pedigree goes back to Ahl al-Bayt [the prophet's family].”

He said that “many regime loyalists in Deir-ez-Zor adopted Shiism after they were displaced to Damascus, fleeing the Islamic State [ISIS] group.”

The Shiification policies have begun to bear fruit, as images have been circulated through activities of the first batch of students from the Al-Bakara tribe who have joined the Al-Baqar Brigade, reaching Tehran to study in an Islamic law school, provided by the Iranian supreme leader.

Money and influence to gain converts

Recent media reports have spoken about the cases of Shiification in eastern Deir-ez-Zor increasing, especially in the villages of Al-Hari and Al-Suweiaa, which are near the Iraqi border, where members of the Hashad al-Shaabi militia have sheltered residents and displaced people from these areas in special tents, while some have entered Iraqi territory.

There has been an attempt to exploit the terrible situation for civilians and persuade them to adopt Shiism in exchange for money and aid.

There have also been cases of Shiification in exchange for releasing prisoners from President Bashar al-Assad’s prisons, securing different services from state institutions and providing the convert with money and power within the regime over their peers and other residents of their village.

The Lebanese group Hezbollah has included a number of volunteers into its ranks from the residents of Deir-ez-Zor city and its countryside, regardless of their religious affiliation, and has set up a recruitment center in the Al-Joura district, giving monthly salaries ranging from $200-400 to those who join and establishing training camps in the western countryside.

Tehran has resorted to the tactic of putting poison in honey, winning loyalty through aid and assistance.

The role of the Jihad al-Binaa foundation has become prominent in distributing food and aid to people.

The foundation has sent dozens of aid shipments to areas under Iranian militia control, especially the villages surrounding Albu Kamal, exploiting the poor material situation of residents, while opening a field hospital in the Al-Qasour district in the center of Deir-ez-Zor city.

The official spokesman for the High Council for Syrian Tribes and Clans, Madar Hamad al-Asaad, said that “the Iranian project to impose Shiification is escalating in Deir-ez-Zor, and has reached the point of Iranian militias preventing residents from returning to their homes, villages and farms unless they get approval from them, and so those who declare loyalty and membership and allegiance to them are permitted to return while raising flags, banners, images and designs that show belonging to the Shia.”

Madar added: “Those civilians who do not do this are accused of terrorism and ISIS membership. They are arrested, killed, or conscripted into the militias, who put them on the front lines or force them to carry out suicide attacks.”

The pro-Iran militias are striving to change the parameters of the province’s “Sunni” identity – in a provocative step, pro-Iran militia members blew up the Al-Farouq Mosque that was in the Al-Kanamat district of Deir-ez-Zor city, while the Deir-ez-Zor Religious Endowments Directorate has changed the name of the Al-Omari mosque in the city center to the Al-Radwan mosque after renovating it, according to a page documenting Iranian violations in Syria.

Deir-ez-Zor city and its countryside have seen notable activity in houses and land being bought at high prices as a part of the plan of demographic change.

The page “Iranian Militia Violations in Syria” said that brokers belonging to Iranian militias have obtained land, sometimes through enticement and sometimes through coercion, whereby they offer to buy from residents at a price higher than the real price and those who reject this are arrested under various pretexts.

A number of Deir-ez-Zor residents said they had received offers to buy their homes and land through brokers and property dealers from the city, who offer large amounts for land and houses, even those which are destroyed.