With the Manbij agreement and the possible withdrawal of the Americans, the Kurds start to look at a possible alliance with the Syrian government writes Al-Watan 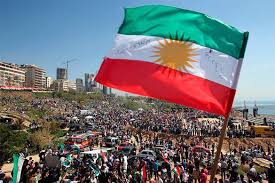 There is no doubt that several small and scattered indications prompted the former Democratic Union Party (PYD) leader Saleh Muslim to say on Jun. 9, 2018: "Our relations are changing with the Americans and we may ally with the Russians and the Syrian government."

This moment of convergence is imposed by the land on which both sides stand and by a potential withdrawal of the United States from Syria, which they believe is going to happen soon.

The issue is a pressing one for American President Donald Trump because of the midterm congressional elections in November. Republicans are expected to lose the majority and if the estimates say that American forces require three to five months to withdraw from Syria, then we are close to a decision by the US to withdraw its troops from the east of Syria.

However, the threats that many American officials recently made must also be taken seriously because the fire of war is close to the Israeli border, so the possibility of a US intervention in the south remains a possibility. If that doesn’t happen, this will mean that Washington has accepted its defeat in Syria.

Damascus’ only option is to go south to extend the state's control, despite the many challenges that awaits it in the battles ahead. It can rely on the support of Russia and it is clear that Moscow fully agrees to the liberation of the city of Daraa as confirmed by the flights carried out by the Syrian airforce above the city, which is a challenge to the quartet that guaranteed the de-escalation zone in the south.

Meanwhile, the Manbjj agreement is the product of the political folly of the Kurds. The Kurdish trauma resulting from this agreement did not prevent them from making a serious mistake. As a reaction to the American-Turkish rapprochement they refrained from pursuing the Islamic State (ISIS) in the pockets they still occupied, which pushed the Americans to call on the Iraqis to intervene as if the Kurds did not realize that the legitimacy of their entity, the PYD, and its forces depended on the role of fighting ISIS that was assigned to them.

The decision to make a rapprochement with the Syrian government is positive, although it was only the consequence of the changing circumstances.

Many factors have pushed the Kurds in that direction including the threats from Damascus and the emergence of many local armed factions, which contradict the political and military structures set up by the Kurds. The steps now required, is the removal of all parties and forces with separatist tendencies from any future negotiations with Damascus, and then to rip apart the maps of Rojava and declare before their own constituency how disastrous that option was, translate this in all the written documents and literature published by these parties, and only then can they claim some form of autonomy that will guarantee the Kurds their cultural and other rights.