Members of the National Coordination Commission are committed to three principles: “No” to foreign military intervention, “No” to religious and sectarian instigation, and “No” to violence and the militarization of the revolution. 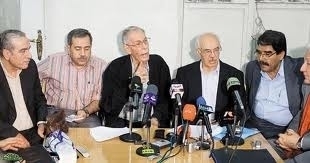 The National Coordination Commission for Democratic Change (NCC) is a coalition of secular nationalist and leftist, non-armed opposition parties and figures based in Syria. It was established in June 2011, as a response to the Syrian revolution that started on March 15, 2011, but also as a final cut-off with the Damascus Declaration. The major Parties in NCC were founding members of DD, but quit soon after the 2007 elections that led to their defeat in the elections.

Its founding document called for peaceful protests to secure basic demands before the opposition would engage in any dialogue with the government: release of political prisoners, withdrawal of the army from cities, annulment of Article 8 of the constitution (ending the ruling Baath Party’s monopoly on power and allowing other parties to compete freely for public office), lifting the state of emergency, allowing foreign journalists to enter Syria, and prosecuting those responsible for violence. The document also presented a political program for the formation of an interim government and the introduction of key reforms. These included the drafting a new constitution and democratic laws governing the establishment of political parties and popular reconciliation; compensation for victims of the revolution; and addressing the Kurdish issue.

Members of the National Coordination Commission are committed to three principles: “No” to foreign military intervention, “No” to religious and sectarian instigation, and “No” to violence and the militarization of the revolution.

Saleh Muslim, Leader of the Kurdish PYD Party, a faction of the radical Kurdish PKK in Turkey.

Following the outbreak of the Syrian revolution in March 2011, opposition figures met to form a coalition of different political blocs. Some had already engaged in similar initiatives in the past, notably in 2005 when the Damascus Declaration for National Democratic Change gathered the largest number to date of signatories calling for the establishment of a democratic state. The 2005 coalition did not last long. Internal rifts led to the 2006 withdrawal of the Muslim Brotherhood, which suspended opposition activities following the start of an indirect dialogue with the Assad regime in 2008. The Arab Democratic Unionist Party withdrew in January of the same year, as did both the Communist Labor Party and the Democratic Socialist Arab Baath Party in September.

Following the start of protests in Syria, Burhan Ghalioun, Michel Kilo, Hussein al-Awdat, Aref Dalila, Habib Issa, Abdul-Aziz al-Khair, and Hazem Nahar called on all opposition parties to reconvene despite political and personal differences in order to develop a common vision. The National Coordination Commission  was formed in Damascus, bringing together fifteen political parties and several independent figures. However, uniting opposition figures in Syria and abroad—and in particular meeting with the Istanbul Group (later named the Syrian National Council)—was no easy task.

In September 2011, representatives of the National Coordination Commission , the Damascus Declaration, the Muslim Brotherhood, and the independent Islamic movement met in Doha to discuss the crisis and agree on a united political platform. The participants agreed to form a national coalition including the four movements, to be announced in Damascus. This agreement also proved to be short-lived, however. When the Arab League announced a peace initiative in September 2011 proposing that Syrian President Bashar al-Assad remain in power for an additional two years, the Muslim Brotherhood withdrew from the agreement.

In light of political differences with the Syrian National Council and other supporting countries, the National Coordination Commission  refrained from attending the Friends of Syria conferences, held in Tunisia in February 2012 and in Istanbul and Paris in April 2012. Turkey had meanwhile recognized the Syrian National Council as the legitimate representative of the opposition, while Saudi Arabia and Qatar had called for arming the Free Syrian Army, a move opposed by the National Coordination Commission . However, the National Coordination Commission  joined the Syrian National Council and representatives from other opposition groups and coalitions at a conference convened in Cairo under the auspices of the Arab League on July 2–3. They issued two closing documents, setting out a National pact and a Joint Political Plan for the Transitional Phase, and agreed in general terms to support the Free Syrian Army, dissolve the ruling Baath Party, and exclude President Bashar al-Assad and other senior regime figures from a role in the transition. Yet, conference participants were unable to agree on the formation of a unified body to represent the opposition.

On September 23, 2012, NCC held a conference in Damascus, entitled the Syria Salvation Conference on September 23, 2012, in Damascus. Twenty other opposition groups and movements attended the conference, which concluded with a call for the immediate toppling of the regime and the establishment of a civil democratic state. Although the gathering was tolerated by state authorities, at least three members of the participating groups were detained a few days prior to the conference.

The conference for the first time recognized the Free Syrian Army and called for the "overthrowing the regime with all its symbols". The Preparatory Committee issued an eight point statement which called for:

A rejection of sectarianism.

"Adopting non-violent resistance as the strategy to accomplish the goals of the revolution".

"Extract[ing]" the Syrian Army "from the clutches of the regime".

Holding the regime accountable for its actions.

The protection of civilians and the upholding of international law.

A disavowal of Kurdish separatism.

The "undivided" cohesion of the Syrian nation.

Relationship with the Syrian Opposition

The Coordination Committee has been described as the "most moderate" opposition faction. Prior to September 2012, its members did not call for the dismantlement of the Syrian dictatorship or the removal of Bashar al-Assad as president. The Coordination Committee, unlike the Syrian National Council believed that the solution was to keep the current Syrian government, and hoped to resolve the current crisis through "dialogue", in order to achieve "a safe and peaceful transition from a state of despotism to democracy".[16] Despite since changing its stance of the continuation of the Assad dictatorship in some kind of transitional capacity, the NCC has held onto its policy of opposing all foreign intervention, but has previously suggested the group would find the United Nations Supervision Mission in Syria acceptable.

The National Coordination Commission has also rejected international support and foreign military intervention, instead calling for internal pressure on the Syrian government in order to achieve a political solution. With the announcement of Kofi Annan’s peace plan in March 2012, some Coordination Body figures indicated their approval of arming the Free Syrian Army or even accepting “humanitarian intervention” should this plan fail. In a radical change of position, National Coordination Commission chairman Hassan Abdul Azim indicated his support for intervention during his visit to Moscow on April 17, 2012, partially bridging the gap with the Syrian National Council.

The major body of the NCC is the Democratic Arab Socialist Union headed by Hassan Abdul Azim and chairman of the National Coordination Commission. Other groups are smaller nationalist-leftist groups such as the Communist Action party, the Arab Revolutionary Workers’ Party, the Arab Socialist Movement, represented by Munir al-Bitar; the Syriac Union Party. The National Coordination Commission also included parties with Marxist leanings; the Maan (Together) for a Free Democratic Syria movement; the Marxist Left Current.

The major Kurdish representative in NCC is the Democratic Union Party, led by Saleh Muslim Mohammed, who many say he is close to the regime.[2]