Suheir Atassi, who is one of the vice-presidents of the National Coalition, has become the most influential woman in the Syrian opposition. 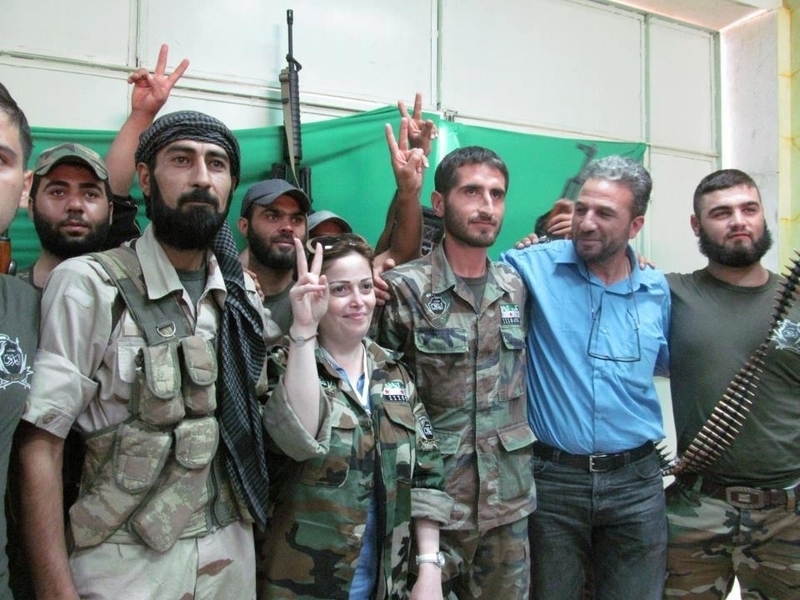 Suheir Atassi is one of a number of outspoken women who appeared in Syria in the first decade of the 21st century and excelled during the preparations for the Syrian revolution and in the course of the revolution. She is now the vice-president of the National Coalition for Syrian Revolutionary and Opposition Forces, the biggest opposition umbrella, which is considered by many local and international parties as the representative of the Syrian people. Ms. Atassi is the daughter of the late opposition veteran Jamal Atassi, founder of the Arab Socialist Party. Before the revolution, Atassi emerged as an outspoken critic of President Assad, as the director of the renowned Jamal Atassi Forum.

Suheir Atassi was born in 1971 to a famous political family which yielded poets, judges, lawyers, ministers and three presidents. Atassi graduated in French literature and education from Damascus University.Her father, Jamal Atassi, was the founder of the first Nasserite party in Syria, the Arab Socialist Party. He was also a co-founder of the famous Democratic National Rally, together with the veteran dissident Riad al-Turk. When Atassidied in 2000, he was replaced by his deputy Hassan Abdul Azim.

Atassi ’s affiliation with the Homs elite, her intellectual nature and the family legacy of forming the detested Baath Party could all prove obstacles on her path to a high position. At the forefront will be bearded leaders of various radical religious forces, followed by commanders of the Free Syrian Army and male members of the Syrian National Coalition. Women will be at the end of the line.

Atassi, who never joined her father’s party, was an active member of a political forum that carried his name: Jamal Atassi Forum, which held public meetings to discuss political reforms after Bashar al-Assad came to power in 2000. It was one of six political forums that in 2000 stirred hope around the country. In 2005, she was elected president of the Forum.

But Assad quickly crushed these political forums; many of their members were arrested and the Damascus Spring turned into a cold winter. Atassi herself and the entire forum’s board of directors were arrested after Atassi had allowed the Syrian Muslim Brothers to present a paper in the forum. When she was released, she resumed her activities, focusing on a circle of young people who later became the core of the Syrian revolution.

Since the Tunisian revolution broke out, Atassi participated in activities that were held in Damascus and other cities to express support for the Arab Spring. She and other activists were attacked during a vigil held in Damascus in solidarity with the pro-democracy protests in Egypt. “"We came to complain of an abuse we had encountered in the street, and the result was that we were beaten, insulted and threatened to death inside a police station," she tells al-Jazeera.

On March 16, she was among several men and women who were attacked fiercely by the secret police. Eye-witnesses say that Atassi was pulled by her hair and dragged to the police van.

After the revolution broke out, activists formed the first revolutionary body, the Local Coordination Committees. Atassi was invited to take part in the group, but she preferred to co-found another group of tanseeqiat called Itihad al-Tanseeqiat (The Union of Tanseeqiat). Although Atassi herself is secular, her critics say that the Union was mainly an Islamic response to the secular LCC. Atassi later played a role in forming the Syrian Revolution General Commission, another umbrella that is depicted as Islamist.

Atassi participated in establishing the Syrian National Council (SNC), which was formed in October 2011 in Istanbul. In 2012, she ran for a position in the SNC, but failed to get it.

When the National Coalition was formed in Doha to succeed the SNC as an umbrella for the Syrian opposition factions, Atassi was elected as vice-president. However, she announced that she would suspend her membership in the coalition, after Hitto was chosen to be head of the interim government, only to change her decision two days later and resume her position.  In Doha, she sat next to Mouaz al-Khatib, the former president of the Coalition, in the Arab League Summit, in what looked to be a rare precedence in an Arab summit.