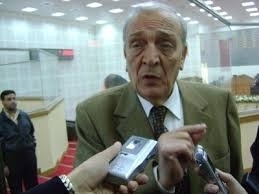 One day in 1961, a Damascene newspaper, al-Inshaa, published the following piece of news: "The revered young man Rateb Shallah, son of prominent merchant Baderiddn al-Shallah, has returned to Damascus with his wife. The couple welcomes guests in their house on the 27th and 28th of this month."  Nearly 30-years later, Rateb Shallah succeeded his father as president of the Damascus Chamber of Commerce. Now he is considered the most influential Damascene businessman and the Equilibrium of the equation of the business community in Damascus in regards to its relationship with the regime and the revolution.

Ahmad Rateb Shallah is the son and heir of the chief merchant in Damascus over half a century ago. His father, Badreddin, was a close friend of the late president Hafez al-Assad. When President Carter visited Syria in the 1970s, Shallah’s father hosted him on his private farm.

Shallah says that has learned more from his father than he did from school. Still, he had to study at a boarding school in the United Kingdom. He went on to obtain his masters from Oxford University in 1956 and his Ph.D. in the United States in 1961.

Shallah says that the best gift he got from his father was when the latter refused to give him money and asked him to depend on himself to build his own career and his fortune. In the 1960s, Shallah lived with his wife and three kids in one room in Beirut while he was teaching at the American University there. Even when Shallah needed his father after going broke in 1969, his father refused to help. Twenty years later his father told Shallah, "Had I helped, you wouldn't have been what you are today."

Shallah moved from one business to another, and had real successes, until he occupied his place in the first row within the Syrian economy.

Shallah is believed to be a member of the Masonic movement, though this is not confirmed. There is, however, a photo of his father's showing him as the head of the Ibrahim al-Khalil Lodge in 1951.

The Syrian rebels criticize Shallah for not taking a clear position toward the revolution. Many Syrians even accuse Shallah of supporting the Assad regime.

When Assad gave his second speech in June 2011, Shallah expressed confidence in the president's promised reforms. He told BBC, "I hope it will be a turning point in solving the crisis and that it will meet the demands of the Syrian people."

Shallah now spends most of his time in Beirut. From there, reports have been leaked about an initiative that he and his son Omar were part of. The initiative, called "the Initiative of the Conscience," tried to mobilize a number of elders to serve as go-betweens between the regime and the opposition. However, they did not succeed. Neither the regime nor the opposition wanted to listen to them or help them.