Brig. Gen. Ghaith Shafiq Fayyad Deeb has been promoted in the Political Security Division, despite being on the sanctions list writes Sowt Al-Asima. 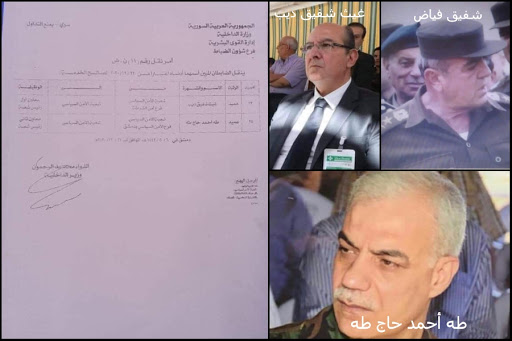 The Officers Affairs Branch of the Syrian regime’s Ministry of Interior issued a decision to appoint Brig. Gen. Ghaith Shafiq Fayyad Deeb, who is on the European sanctions lists, to the position of first assistant to the head of the Political Security Division.

News pages on social media circulated the decision, issued on Tuesday, bearing the signature of the Minister of Interior in the regime’s government, Mohammad Khaled al-Rahmoun.

The decision, a copy of which was reviewed by Sowt Al-Asima, also included Brig. Gen. Taha Ahmad Hajj Taha, who became second assistant to the head of the Political Security Division, Maj. Gen. Nasser al-Ali.

The European Union had included Fayyad on its blacklists as he was responsible for killing demonstrators, in addition to recruiting militias for the regime forces in Damascus and its countryside.

Fayyad is the youngest son of Gen. Shafiq Fayyad, who hails from the village of Ayn al-Arous in Qardaha, the birthplace of the Assad family, and is known locally for committing massacres in the cities of Aleppo and Hama in the years 1980 and 1982, while he was commander of the Third Division.

Fayyad Sr. occupied the position of commander of the Third Division during the rule of Hafez al-Assad, rose in military ranks, and became deputy to the former Defense Minister, Mustafa Tlass, before he was dismissed in 2003, during the era of Bashar al-Assad.

At the start of the Syrian revolution in 2011, Gen. Fayyad was returned to service as a special military advisor to suppress anti-regime movements. He passed away in 2015, according to reporting by Arab media.