The military magazine, “Together, We Build Peace,” has released an issue that reported on Russian celebrations in Syria and ground operations conducted by them. 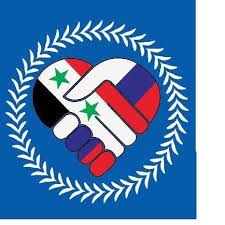 Issue number 35 of the military magazine, “Together, We Build Peace,” has been issued. The magazine is published jointly by the Syrian and Russian defense ministries, and its editors are the Syrian Brigadier General Aktham Kaser and Russian Colonel Dmitry Olegovich.

The new issue includes a number of topics including President Bashar al-Assad’s visit to Syrian forces in the Hama and Idleb countrysides.

During his tour, Assad, accompanied by Defense Minster Gen. Ali Abdullah Ayyoub, was briefed by the commanders of the forces stationed in al-Habit town about the current situation on the ground, particularly following combat operations that have led to the defeat of terrorists and re-establishing control over tens of villages and towns spread across hundreds of kilometers. The commanders also briefed Assad on the preparations and the readiness of the forces for liberating Idleb and other areas where terrorist organizations are still present.

The second subject was the entry of regime forces into the villages and towns of Hassakeh province and the countryside of Raqqa city. The magazine published photos showing dozens of Syrian forces in the Ayn Eissa area in the Raqqa countryside and in the city of al-Tabqa and its military airport and the town of Tel Tamr in the northwestern Hassakeh countryside. The magazine added that, “the Syrian flag was raised over a number of state institutions, including the schools in the cities of Hassakeh and Qamishli.”

All other news was related to Russian military forces in Syria, including a report on planting trees in “areas where the Russian military police are present in the Damascus countryside, in honor of the heroic Russian soldiers.” A celebration that was opened with the Syrian and Russian national anthems.

In another article, the Russian military police carried out their first patrols in Manbij city. The magazine quoted an officer in the Russian police as saying that, “Thanks to our forces, the military operations have stopped.”

Syrian and Russian officers are responsible for writing in the magazine.