Thanaa al-Hussein, a Palestinian survivor of the Sednaya prison death camp, testifies in a video to Zaman al-Wasl. 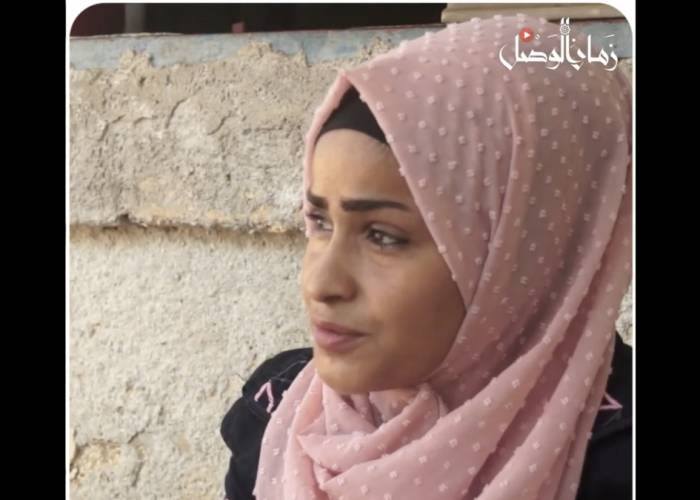 Thanaa al-Hussein is a Palestinian survivor of the Syrian regime’s Sednaya death camp. She has testified to the rape and torture she endured for six months, and if she speaks openly, it is for all the other inmates in Assad’s prisons. Her exceptional courage deserves our mobilization, so let’s share her words, let it be known.

“My name is Thanaa al Hussein, from Yarmouk refugee camp in Syria. We lived through the siege of the camp for seven months, seven months of fear, thirst, hunger… At the time I was married, rumors said that we would be moved to the north of the country, my husband refused to leave, he said there would be an agreement (with the Assad regime) for those who wished to stay.

One day, two state security agents came to my home, handcuffed me, and took me to their barracks. They interrogated me accusing me of helping armed militias, then transferred me to the Palestine barracks, because I am Palestinian. During my transfer, hands cuffed behind my back and hooded, I cried and implored them to let me find my child alone, swearing to them that I had never done anything. They were beating me up, talking obscenities, and accusing me of terrorism. I had only two things in mind, my son and my mother. My little one, at the time, was a year old, those were his first words, he said mom. I thought I was going to die, that’s what happens when you get arrested in Damascus, you get raped, you die … Anyway, I was socially dead, I would be a plague when I got out of prison.

They put me in a dark cell, I was very, very scared. A tall man with the Alawite accent (coastal region accent) walked in and accused all Palestinians of being dogs, traitors, and causing the revolution. He started hurling obscenities at me while touching me. I couldn’t stand it, I begged him and swore I was innocent, “but why are you doing this to me? ” That day he did not rape me, he got out of the cell, some guards came in and poured water on me, they threw me a piece of bread with some olives. I didn’t want to eat, the guards threatened me: “If you don’t eat things will not turn out well.” I ate while crying.

During the night, the great guardian returned. He was touching my private parts. I couldn’t repeat the obscenities that came out of his mouth, they are so vile and unpronounceable (A big sigh and silence.) He raped me then and did it again the next day, then the next day, then the next. My detention in the Palestine barracks lasted about a month, then they transferred me to a place that I did not know. I had lost my faith, I had lost all hope … I was hoping for death every second, given what I was going through.

I found myself in a dark cell again, alone with jailers beating me up and accusing me of terrorism, it lasted four to five days before I was transferred to a cell with other girls. It was Sednaya prison, there were 35 women in that cell. We were forbidden to speak among ourselves but, while whispering, I learned of the presence of Maryam el Elou with her mother, both residents of Yarmouk camp.

There is a dark day in Sednaya prison, it is shower day, we had to wash ourselves in a few minutes, we no longer had any notion of time. During the toilet, the jailers beat us from behind, they pulled our hair and touched our private parts. Back in the cell, all the women were in tears. It’s very difficult for me to speak so it’s hard but I have to do it, I had the chance to get out of this hell, the world must know, all countries must know, I appeal to the world to act. We are subjected to daily torture, detainees die a thousand times a day in this place. In Sednaya, of course, there were rapes, the jailers entered the cell, chose an inmate according to her physique, and embarked her.

I stayed five months in Sednaya. One day a jailer called me. I immediately thought of the execution or the rape, that was the only reason we were called. One of the officers explained to me that I had been detained by mistake and that after verification I was going to be released.

He advised me never to talk about what I had been through and seen, “otherwise your next detention may be very different from this one.” I was happy and sad, I was afraid of the reaction of my relatives and society. I left very tired psychologically. The world needs to move for the detainees. I have lived through six months of indescribable suffering. Imagine the suffering of those detained for two, four, or six years. Some died, others survived, others lost their minds.