Shocking videos showing the cremation of the detainees' bodies by regime forces in southern Syria were obtained by Zaman al-Wasl. 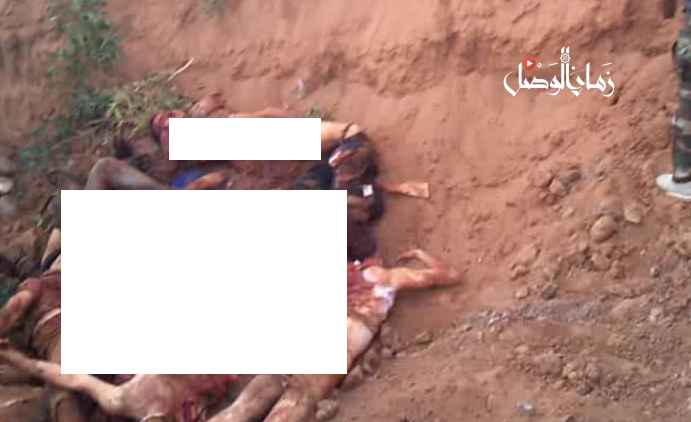 Zaman al-Wasl has obtained shocking videos showing the cremation of the detainees’ bodies by regime forces in southern Syria.

The burnt bodies of hundreds of detainees had been buried in mass graves between 2011-2013 in a deserted area near the town of al-Masmiya in the northwestern countryside of Daraa city.

Watch the footage on Baaz platform

Agents of Military security and Air Force Intelligence, backed by regime forces, were routinely transporting the executed prisoners in trucks to pits in the desert and set on fire en masse. The daily cremation rate by the regime reached up to 100 bodies, the source said.

According to well-informed sources, most of the detainees died of torture or were executed in summary trials.

Zaman al-Wasl has identified two security agents featured in the footage.  The Alawite troops of Bashar al-Assad were showing signs of insane joy while abusing the detainees’ bodies.

Most of the victims were tortured to death in a military prison inside the Damascus International airport and in the capital’s security chambers, according to Zaman al-Wasl source.

The Syrian Network for Human Rights says about 100,000 people were arrested or forcibly disappeared since the beginning of the uprising against Bashar al-Assad in 2011.

The United States accused the Syrian regime in May 2017 of using a crematory to hide mass murders at a prison where thousands are believed to have been summarily executed, The New York Times reported.

The assertion, based on declassified satellite photographs of the prison, significantly expanded the accusations the United States has leveled at Assad with some officials appearing to draw a parallel to Nazi Germany.

“The attempt to cover up mass murders in the Assad crematorium is reminiscent of the 20th century’s worst offenses against humanity,” said Nikki R. Haley, the then-American ambassador to the United Nations.

The Syrian Network, in cooperation with the Euro-Mediterranean Monitor, had previously issued a full report (February 2015), reminding the international community that no one condemned the barbaric actions of those who are burning Syrians alive or dead.

The report acknowledged at that time that documenting the crimes of burning Syrians is very difficult, and even more difficult than finding clips that monitor these crimes, noting that it was able to confirm that the Assad regime had burned alive, from the beginning of the revolution in 2011 until February 2015, 82 people.

As for the corpse burned by the regime, the report said that it confirmed 773 people, including 146 women and 69 children. These burnings took place during massacres in different regions of Syria, meaning that they were accompanied by incursions and raids.

Tens of thousands of people are believed to have been tortured or killed in Syrian jails since the Arab spring began. Sednaya prison, a military facility on the outskirts of Damascus, has long been considered one of the most formidable institutions in Syria, according to the Guardian.

The Detainees and the Missing in Sednaya Prison (ADMSP) called for the international community to pressure supporters of the regime into revealing the fate of the disappeared. It also demands that officials reveal where the dead were buried and allow DNA testing of remains so that victims can be returned to their families, the Guardian reported.

Ten years of war in Syria have killed 500,000 people and driven half the pre-war population of 22 million from their homes, including more than 6.7 million as refugees to neighboring countries.