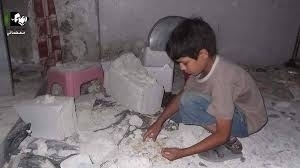 The Syrian Coalition demands that Assad halt his genocide and starvation of civilians in Mouadamiyah by ceasing all attacks and allowing humanitarian aid into the area. We urge the international community to stop neglecting its responsibilities and to immediately begin establishing humanitarian corridors, providing international relief agencies with unfettered access to save civilians in Mouadamiyah.

For 331 days the Assad regime has besieged the suburb of Damascus, Mouadamiyah, in attempt to bring the Free Syrian Army soldiers within the area to their knees. However there are 12,000 civilians in Mouadamiyah, 7000 of them women and children, who have for months now, been without basic necessities. Assad’s newest tool of war is starvation. Children, as they are the most vulnerable to this tactic, have begun to starve to death. The videos below show a seven year old girl who died of starvation and two boys stating that they resorted to eating leaves from trees.

Due to some pressure, the Assad regime has allowed the Red Cross, in coordination with the Red Crescent, to evacuate about 1000 women, elderly and children under 14 from the area. These vulnerable individuals have been placed in a school and are now under regime surveillance. On Oct. 12, 2013, while playing outside the school, ten boys from these evacuated individuals were kidnapped. We must withhold their names for their safety. Today, four of these boys were released and have reported that they were tortured while undergoing intense questioning about the FSA in Mouadamiyah.

The Syrian Coalition is very concerned for the safety of the boys who remain in detention and also for all of the evacuated families who are now under regime surveillance. They may have escaped starvation but they continue to face the terror of the Assad regime.

Red Cross officers have been alerted about the dangers of placing these vulnerable people under the care of the regime but have stated that they are just humanitarian aid providers and can do nothing to ensure the safety of these families from armed factions or from Assad’s mukhabarat agents.

Furthermore, it is crucial to remember that the evacuation of these individuals does not end the humanitarian crisis in Mouadamiyah. Thousands of civilians remain under siege and threat of starvation. 900 injured/sick individuals await urgent medical care. We must continue to exert pressure on the Assad regime to end the deadly siege on Mouadamiyah.

Duaa al-Sheikh: 7 years old dies of starvation in Mouadamiyah. Signs of malnutrition in are evident.

Two boys tell the videographer that they are hungry. They have resorted to eating leaves from trees.

We ask for mercy for our martyrs, health for our wounded, and freedom for our detainees.

Long live Syria and its people, free and with honor.