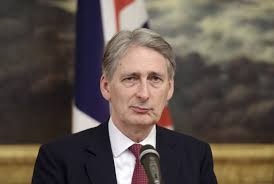 The UK Foreign Secretary Philip Hammond has said that the UK’s position on Syria remains "steadfast", calling for a "Syrian-led political transition and a genuine commitment to the UN-led peace talks are the only route to the peace so desperately needed by the Syrian people."

Hammond said in a statement, a copy of which was received by The Syrian Observer, that he had met with the Chairman of the Syrian Higher Negotiations Commission Dr. Riyad Hijab.

“In my meeting with Dr Hijab," the statement said, "I reaffirmed my support for the Syrian Opposition’s Higher Negotiations Committee. We agreed on the need to bring an urgent end to the suffering in Syria, for the regime and Russia to end attacks on civilians immediately, and for full humanitarian access to be granted to besieged areas.

“Russia and the regime are deliberately targeting the opposition and thus strengthening Daesh. Their actions against civilian populations and infrastructure are in breach of international humanitarian law,” Hammond added.