150 groups sign letter rejecting the U.N.'s decision to back the Russian-organized conference 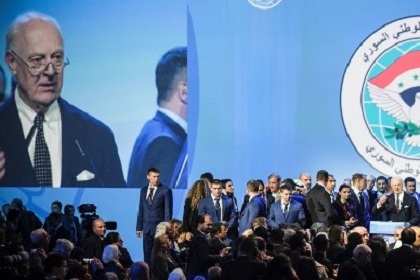 Syrian civil society groups and organizations have written to United Nations Secretary-General Antonio Guterres accusing him of rewarding Russia by sending Special Envoy Staffan de Mistura to the Sochi congress, and thereby giving the “legitimacy of the United Nations” to the conference.

The following is the full text of the message:

More than 130 Syrian civil society organizations wrote to you on Jan. 3, 2018, to express their concern regarding the Sochi conference scheduled to be held in Russia. These included workers in the humanitarian field, rescue operations, human rights monitors and local councils present inside Syria and abroad. We were all united in our opposition to Sochi and urged you to redirect your efforts to reviving the Geneva process and to do everything in your effort to support a just and credible national dialogue process.

In the period preceding Sochi, both your office and the office of the special envoy clearly expressed that the United Nations will not participate in Sochi unless the Syrian regime participates seriously in the discussions held in Vienna in January. The Syrian regime failed to meet your condition by any metric. However, the condition which you placed was ignored and replaced with “assurances” from Russia. By conceding to Russia without obtaining the change which you requested in the regime’s behavior, you have bolstered Russia’s feelings of control and ownership over the process and surrendered the influence which you had sought to create. Instead of burdening Russia with the need to bring the regime to the negotiating table in a serious manner before rewarding it, you gave the gift of United Nations legitimacy beforehand. What will be the punishments for Russia if it retreats from the assurances which it offered? And how will you be able to impose the implementation of these assurances?

In the days which preceded Geneva 9, Bashar al-Assad’s forces have used chemical weapons in Douma, which have wounded dozens of civilians. The regime has also attacked children with chemical weapons — with Russian support — and has carried out destructive air attacks on Idleb, which have displaced tens of thousands of civilians. During the negotiations, the regime tightened its siege on the Eastern Ghouta and killed Civil Defense teams and refused to permit the entry of medical assistance to 765 patients in serious conditions. While the negotiations were underway in Vienna on Jan. 25, Hadya, a 50-year-old cancer patient, became victim No. 21 of Assad’s siege.

While the infamous Assad increases his attacks inside Syria, his negotiating team refused to engage in serious talks in Vienna. Rather than laying the groundwork for peace, Assad’s representatives wasted time rebuking the special envoy. How is it possible to use this flagrant obstruction as a result to agree to Sochi? How can the United Nations — to which Syrians have entrusted the peace process — surrender its conditions in favor of trusting the “assurances” of a government that has attacked Syrian civilians, defended war criminals and backed away from nearly all assurances it has given?

If the United Nations fails to comply with its own conditions — the frequent pattern of red lines and conditions which are given up — this is exactly the reason behind the refusal of the Syrian regime and its allies to negotiate in good faith and their continuing challenge to international law. The parties to the conflict will continue to kill and starve civilians and attack them with chemical weapons as long as they face no punishment for their crimes. We greatly fear that your decision to give legitimacy to Sochi undermines the peace process led by the United Nations. This is not only because we do not trust Russia’s intentions in Sochi but also because of the message which has been sent every time the international community has failed to implement the lines which it has drawn. We urge you not to repeat this error and instead to adhere to the conditions which you have set forth. Anything less than that will reduce the opportunities for peace and undermine the status of the United Nations of civilians everywhere.