Julani, the leader of the HTS, is trying to improve his image to gain credibility in the eyes of the local community as well as in those of the west, according to al-Hal. 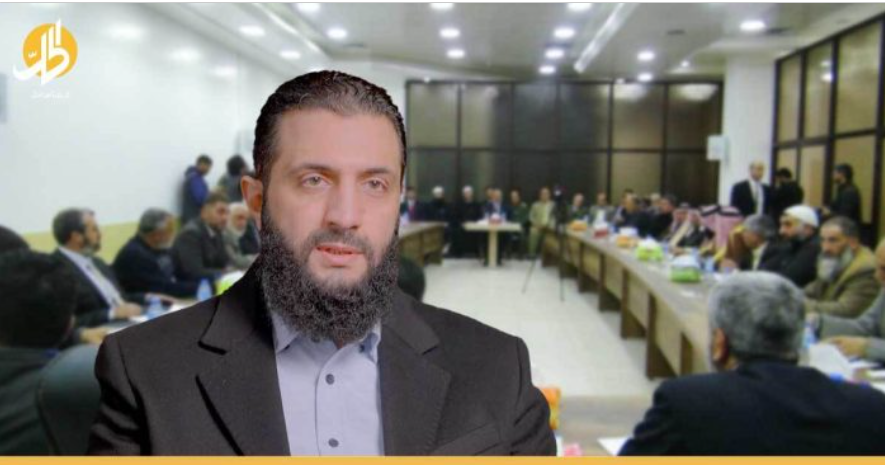 Tahrir Al-Sham (HTS) leader Abu Mohammed al-Julani is constantly trying to present himself in a positive image and pose as an alternative to the Syrian government. Julani is doing so by presenting a civilian government from his military forces as one that is supportive and serves civilians in areas under the control of the HTS.

A general state of tension has recently broken out in the northwestern regions of Syria. This tension stems from the economic crises caused by the collapse of the Turkish lira, which is approved for general trading in the region. The Turkish lira’s devaluation has caused price rises for various goods and services, including basic Syrian food items such as bread.

This is why HTS leader Abu Mohammed al-Julani appeared in civilian clothes on Tuesday to attend a meeting of the General Shura Council in Idleb, alongside the Ministry of Economy for the Syrian Salvation Government (SSG).

The SSG announced a new move to subsidize bread after the recent price hikes, through government bakeries as well as private bakeries operating in the region.

Analysts say that the SSG’s announcement was intended to justify its uncontrolled theft of the region’s resources and the dedication of revenues to its military coffers in Idlib and its surroundings.

The SSG has emerged as a body subsidizing essential items, including bread, to present a good public face to local communities, while avoiding subsidies for fuel, which are a staple commodity for the people of the Idleb governorate.

Despite making huge profits of up to 1.5 million USD per month through the fuel trade via the Bab al-Hawa crossing, the SSG’s Watad Fuel Company is raising petroleum products’ prices with every decline in the Turkish lira, without any regard for the circumstances of local communities.

This last meeting formed part of the policy by Julani of improving his image in these communities, complementing his attempts to market himself to the international community. This campaign began in early 2020, with the primary aim of bringing himself closer to the West.