Following their meeting on October 22nd, Nafta Bennett and Vladimir Putin have agreed to let Israel attack Iran in Syria, while Russia turns a blind eye, according to al-Modon. 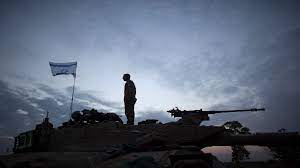 The Jerusalem Post quoted a senior Israeli air force officer as saying that Russian President Vladimir Putin and Israeli Prime Minister Naftali Bennett “agreed during their last meeting to work on driving Iran out of Syria.”

The newspaper reported that the motive behind the recent Russian-Israeli rapprochement — which started and grew from Bennett’s meeting with Putin on October 22nd — is that the two sides “have a common goal of driving Iran, along with its agent Hezbollah, out of Syria.”

The newspaper added that the reality on the ground indicates that the Israeli army “is conducting careful follow-up operations focused on direct Iranian intervention and the movements of Iran’s militias. With all its efforts, the Israeli army is trying to push them back.” Meanwhile, Russia has adopted the position of “a spectator who turns a blind eye to the actions of both Iran and Israel.”

“For nearly a decade, Israel has been working on the difficult task of destroying Tehran’s dreams of regional hegemony. Israel has constructed a bulwark against Iran and carried out hundreds of airstrikes in Syria. Israel deals with Russia, as the main force in the Syrian war, and sees Russia as the party that Israel must communicate with when it wants to carry out strikes in Syria.”

“Israel and Russia are using a conflict avoidance mechanism to avoid unwanted incidents. Moscow has allowed Tel Aviv to operate freely in Syrian airspace, as long as it does not endanger Russian forces,” the Jerusalem Post quoted sources as saying.

The sources pointed out that the United States, Israel’s strongest ally, is not opposed to the Israeli-Russian rapprochement. Rather, Washington perceives an entry point for a Russian-U.S. rapprochement on Syria, with both countries recognizing that Russia has the leading influence in the Middle East. These calculations may also affect Syrian regime president Bashar al-Assad, in prioritizing his relations with Moscow over his relations with Tehran.

The Israeli newspaper asked: “Will Assad listen to Putin and choose Russian influence over Iranian influence? Or will he decide to stay in Iran’s camp and allow Iran to consolidate its forces and weapons further in preparation for a future war with Israel?”

In related news, the Israeli newspaper Yedioth Ahronoth revealed that the Israeli army had used surface-to-surface missiles to attack targets inside Syrian territory on Saturday. The attack complied with a Russian request aimed at not harming the reputation of Russian weapons and missile batteries owned by the regime. In exchange, Russia permitted continued Israeli military activity in Syria.