Shelling by the Syrian Assad regime killed 13 people Wednesday in the opposition-held province of Idleb, as a retaliation to a bus attack in Damascus, according to Zaman al-Wasl. 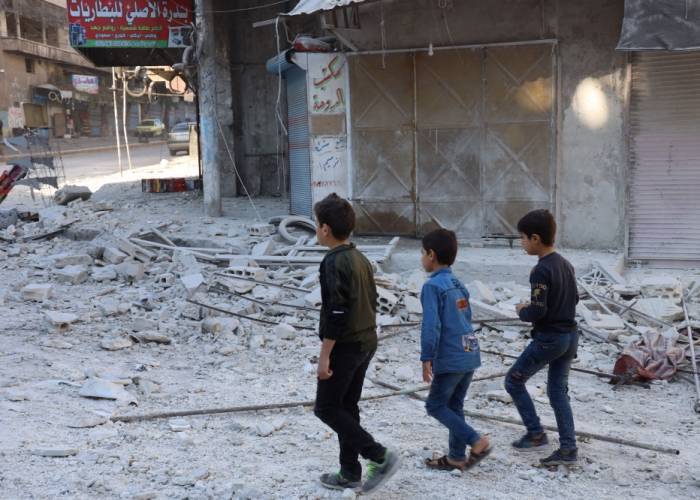 Shelling by the Syrian regime army killed 13 people Wednesday in the northwestern region of Idleb controlled by rebels, a war monitor and local activists reported.

Rockets struck a busy area of the town of Ariha, the Syrian Observatory for Human Rights said.

Among the casualties were several school children, witnesses, and medical workers in the opposition enclave said.

The shelling of the Idleb town came in retaliation after two roadside bombs exploded near a bus carrying regime troops during the morning rush hour in the Syrian capital early Wednesday, killing 14 people and wounding others, according to the state TV.

The attack was the deadliest in Damascus in years, and a rare event since regime forces captured suburbs formerly held by insurgents in Syria’s decade-long conflict.

State-run TV showed footage of the charred bus in central Damascus, saying the blasts occurred while people were heading to work and school. The report said a third bomb was discovered and dismantled in the same area.

No one claimed responsibility for the attack, which occurred at a main bus transfer point under a bridge, where vehicles converge and head out to different neighborhoods of the capital.

“It is a cowardly act,” Damascus police commander Maj. Gen. Hussein Jumaa told state TV, adding that a police force had cordoned off the area immediately and made sure there were no more bombs. He urged people to inform authorities about any suspicious object they see.

Jumaa said one of the wounded had succumbed to his wounds later Wednesday raising the death toll to 14.

More than an hour after the blast occurred, workers cleared the scene of the explosion, and the burnt-out bus was removed.

Bashar Assad’s forces now control much of Syria after military help from his allies Russia and Iran helped tip the balance of power in his favor.

Syria’s conflict that began in March 2011 has left more than 500,000 people dead and displaced half the country’s population, including five million who are refugees abroad.

In August, Syria’s state media said a short circuit triggered an explosion in the gas tank of a bus carrying soldiers, killing one and wounding three. (With AP, AFP)