An attack near a bus carrying Syrian soldiers in the Syrian capital Damascus led to the death of 14 regime soldiers, sparking vengeful promises from the regime and condemnation by Russia and Iran, according to SANA and Syrian TV. 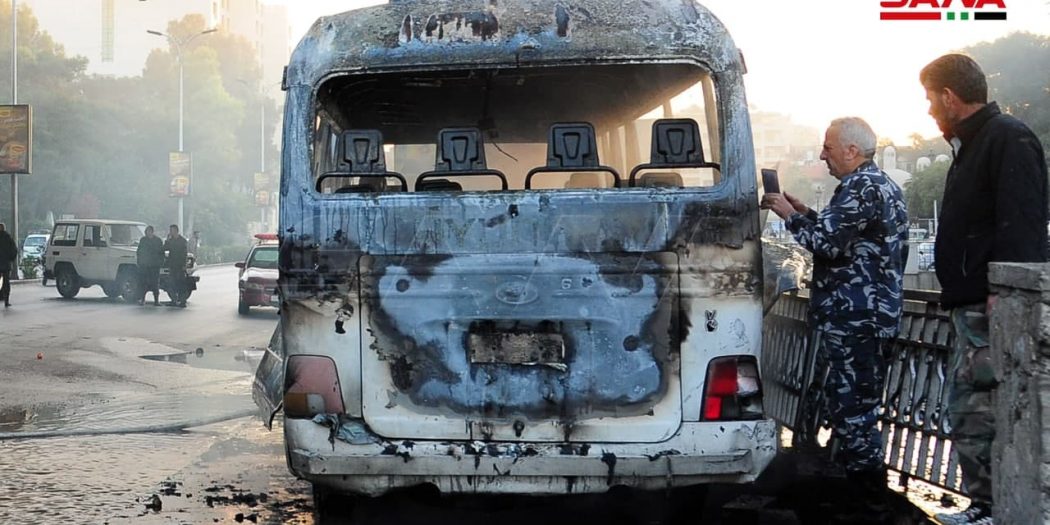 Two roadside bombs exploded Wednesday near a bus carrying Syrian soldiers during the morning rush hour in the Syrian capital. Fourteen people have been killed; others wounded as a result of the bus attack in Damascus, state TV reported.

The Syrian state TV showed footage of the charred bus in central Damascus, saying the blasts occurred while people were heading to work and school. The report said a third bomb was discovered and dismantled in the same area.

No one claimed responsibility for the attack, which occurred at a main bus transfer point under a bridge, where vehicles converge and head out to different neighborhoods of the capital.

Interior Minister Mohammad al-Rahmoun has claimed that the terrorist attack on a bus which took place on Wednesday morning at the President Bridge  in Damascus “came after the elimination of terrorism from most of the Syrian territory and those who plotted this coward attack wanted to inflict harm on the largest possible number of citizens.”

In a statement to the national al-Suriya T.V. Channel, Minister Rahmoun affirmed that those who were behind the attack will be pursued, saying “We will continue to pursue terrorists who committed this heinous crime wherever they are.”

Assistant Foreign and Expatriates Minister, Dr. Ayman Sousan stressed that Syria will continue its combat against terrorism on its territory till eradicating it completely.

He said in a phone call with the Syrian Ekhbariya TV Channel that “the terrorist explosion that targeted a military bus near the President Bridge in Damascus on Wednesday morning reflects despair after the conspiratorial scheme hatched against Syria, was thwarted and after terrorism defeated.”

He added that choosing this crowded area to carry out this cowardly terrorist attack affirms the criminal nature of those killers who were seeking to increase the number of deaths among innocent civilians, asserting that such terrorist crimes will not hinder the efforts to consolidate stability and security all over the country.

The first one who is responsible for this heinous crime are the owners of the conspiratorial scheme hatched against Syria, on top, the Zionist entity as this scheme mainly serves “Israel” and its agendas in the region, while the ones who bear the direct responsibility are their tools who accepted to be a part of the conspiracy against their homeland, Sousan said.

Sousan noted that the Foreign and Expatriates Ministry and its diplomatic missions abroad work on investing the victories achieved by the heroes of the Syrian Arab Army over terrorism, and to convey a true image about the reality of what is taking place in Syria, and the conspiracy hatched against it.

He affirmed that the Arab dimension in the Syrian foreign policy is essential and what had been plotted against the region aimed to target the idea of Arabism based on the common security and stability of Arab countries.

Moscow and Tehran have condemned the attack.

“We strongly condemn that heinous terrorist act and express our sincere condolences to the families of the victims and wish recovery to the injured”, the Russian Foreign Ministry said in a statement.

It considered that “this bloody crime is a blatant challenge which aims to question the ability of the authority in Syria to ensure the security of the capital, stir a new wave of violence and obstruct efforts to resolve the political crisis in Syria.”

The Ministry affirmed the importance of unifying the efforts of the international community to combat the global terrorist threat on the basis of international law and cooperate with the Syrian government in this field.

He expressed Iran’s solidarity with the government, people, and families of the victims in Syria.